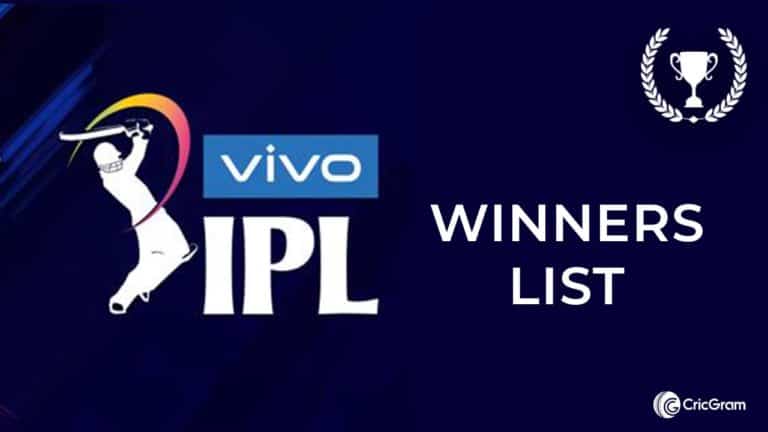 IPL winners list and Runner up list: Mumbai Indians have been the most successful team with four titles. followed by Chennai Super Kings who hold three championships.

The Indian Premier League (IPL) is a professional Twenty20 cricket league in India. The league was founded by the Board of Control for Cricket in India (BCCI) in 2008.

After the historic triumph in 2007 T20 WC, India became the first nation to start a franchise-based T20 league. Dominated by Indian players, every cricketer around the globe aspires to get big bucks in this lucrative competition. Here’s more on bygone years of the Indian Premier League.

18th April 2008. It’s one of the essential days in cricket. In importance, it equates to the day first Test match was played or the first ODI was played or when the first T20I was played. On this day, India unleashed a behemoth that soon captured the imagination of fans and the monetary wishes of cricketers. On this day, the first-ever IPL match was played. Since then, the tournament has been the greatest attraction for all the cricketers around the world.

The 2007 T20I World Cup victory helped the 20-over format gain acceptance in Indian cricket. Lalit Modi, using all his might, brought cricket to the businessmen, thus forming a fantastic product. Although the franchise-based competition has been under a lot of criticism since the inception, it is without a doubt the best T20 league in the world.

Usually, eight teams participate in the tournament, but there have been editions with nine or ten teams.

Mumbai Indians have been the most successful team with five titles followed by Chennai Super Kings who hold three championships. Here’s a list of IPL winners:

The underdog team led by the spin wizard Shane Warne went beyond everyone’s expectations to lift the inaugural IPL championship. In the final that was decided in the last over, Rajasthan Royals won by three wickets against Chennai Super Kings. It remains Rajasthan’s only final appearance so far.

This tournament was played completely on the South African soil due to clash with general elections. In the first season, Deccan Chargers finished at the bottom of the point table. In the second, they completed a miraculous comeback by becoming the champions. Adam Gilchrist and his men took down Royal Challengers Bangalore in the final at Johannesburg.

The first glimpse of MS Dhoni’s magic. The yellow team defended 168 runs against Mumbai Indians in the high-voltage final at DY Patil Stadium, Navi Mumbai. MS Dhoni’s perfect field placement against rampaging Kieron Pollard was hailed as a masterstroke. It was the first of many for the Chennai side.

Keeping the reign alive, CSK became the first team to defend their IPL crown. This time their task was to stop T20 cricket’s newest legend – Chris Gayle. R Ashwin got rid of him in the third over of the 206-run chase. Chennai ended up winning by 58 runs. They were also the first IPL champions to win on the home turf.

At the halfway stage of the final, CSK placed 190/3, were confident completing a hat-trick. However, the night turned out differently as KKR opener Manvinder Bisla tore apart the yellow army. His 89 from 48 balls complimented by Jaques Kallis’ 69 from 49 balls carried the East Indian side home with five wickets remaining.

The long-awaited victory finally arrived for the Mumbai Indians as they defeated Chennai Super Kings in a low-scoring final at Kolkata. Kieron Pollard’s 60 from 32 balls proved to be decisive as MI managed to defend 148 runs against the yellow army.

With 115 not out from Wriddhiman Saha, Kings XI Punjab managed 199 runs on the board batting first in the final at Bengaluru. Manish Pandey responded with s sterling 94. Yusuf Pathan supported with a blistering knock. Piyush Chawla with his 13 off five balls sealed the second IPL title for Kolkata Knight Riders.

Batting first in the final match at Eden Gardens, Mumbai posted an enormous total of 202/5. Lendl Simmons top-scored with 68 while the captain Rohit Sharma added 50 from 26 balls. Despite a belligerent start from Dwayne Smith, Chennai collapsed against the tight bowling from MI. Mumbai won the game by 41 runs.

With four centuries in a season, Virat Kohli was in an unbelievable form in this IPL. His extraordinary performance overshadowed David Warner’s incredible season. However, the Australian went on to win the IPL trophy for his franchise. Warner’s 69 off 38 balls helped the Sunrisers clinch their maiden championship even with Kohli and Gayle scoring fifties.

Overcoming the internal bickerings, Rising Pune Supergiant qualified for the final against the in-form Mumbai Indians. At Hyderabad, Mumbai team managed to post only 129/8 in their first innings. Pune looked poised to seal the chase, but the Indians kept coming back in the game. The Men in Blue ultimately sealed the game on the final ball with a one-run victory.

Serving a two-year suspension, Chennai Super Kings came back in the tournament and claimed the throne straightaway. MS Dhoni’s overcame Sunrisers Hyderabad in the final at Mumbai to secure an eight-wicket triumph. Watson took ten balls to get off the mark but went on to score a century. Chennai chased 179 to win the match by eight wickets.

In a struggle of heavyweights, Mumbai Indians and Chennai Super Kings faced each other in the most high-profile clash. Chasing 150 runs to win, Shane Watson was once again proving to be a man of the final. However, his run out and Malinga’s last-over magic turned the game around for MI. The one-run win saw them lifting their fourth IPL trophy. All in odd years since 2013.