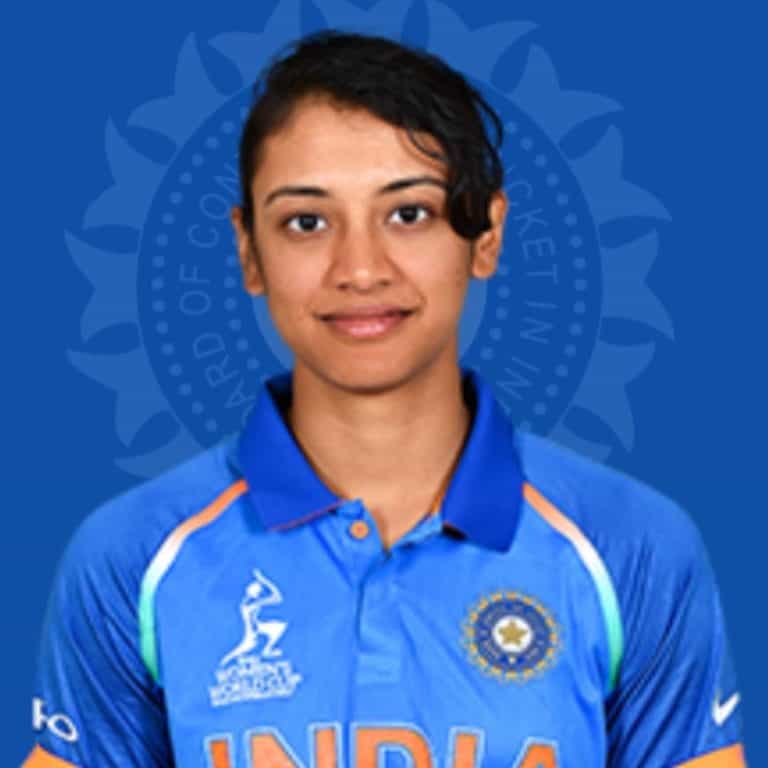 Smriti Mandhana (born 18 July 1996) is an Indian Cricketer who plays for the Indian women’s national team.

Born in 1996, Smriti Mandhana originally belonged to Mumbai. While at the age of 2, her whole family shifted to Sangli in Maharashtra. Sangli was the town where she completed her school education.

Smriti’s brother was very fond of cricket and played at the district level for Sangli. He ignited the love for cricket in the innocent mind of Smriti. Watching her brother play the U-16 tournaments, Smriti got highly inspired and started to practice cricket. Her brother and father helped her learn the game.

In 2013, she became the first Indian woman to secure a double hundred in a one day game. In 2016 Women’s Challenger Trophy, she aroused as the tournaments’ top scorer. After being signed up for 2016 Women’s Big bash League (WBBL), she along with Harmanpreet Kaur became one of the first two Indians who got a chance to play for this league.

She was named Player of the series during Women’s Twenty20 International in 2018. During the Women’s World Twenty20 tournament in West Indies, she was appointed as the Star of the team. She became the youngest T20I captain for India in T20I squad 2019. In May 2019, She added one more laurel to her fantastic career by winning Woman Cricketer of the Year award at CEAT International Cricket Awards.

She made her test debut in 2014 against England. Mandhana fetched 76 runs in an opening wicket partnership with Thirush Kamini. She scored her maiden hundred in second ODI of India’s 2016 tour of Australia. She secured 90 against England during the World Cup 2017 and became the Player of the Match. While being selected for this series, the young girl had to skip her class 12 board exams.

Her mother was her significant support ever since she made a choice to play cricket. Smriti Mandhana’s mother takes complete care of her diet and helps in organising things and events for her. Smriti Mandhana’s father looks after all her cricket programs. Her brother, Shravan, still maintains her in the nets. Beyond all this, they all have been a constant support for her in her commendable journey.

In 2017, she underwent a traumatic injury. She fell awkwardly during fielding her final ball of the over. Because of which, she hurt her knee badly. After being diagnosed, she was ruled out with anterior cruciate ligament rupture. She took five months off to recover from her injury. While all this, she had to miss specific essential tournaments like the World Cup Qualifier and Quadrangular series in South Africa. She stayed at the National Cricket Academy, Bangalore during her intense rehabilitation period. She worked hard to regain her fitness to be able to play for the World Cup.

During her West zone U19 Cricket League, she scored commendable 224 after which she was gifted a bat by Rahul Dravid. She idolises Kumar Sangakkara and Mathew Hayden. Among her teammates, she is in complete awe for Jhulan Goswami. She was also ranked among the Forbes top 30 under 30 (Age). The Government of India awarded her the Arjuna award in 2018. She is the youngest Indian women to score a fifty in T20I cricket.