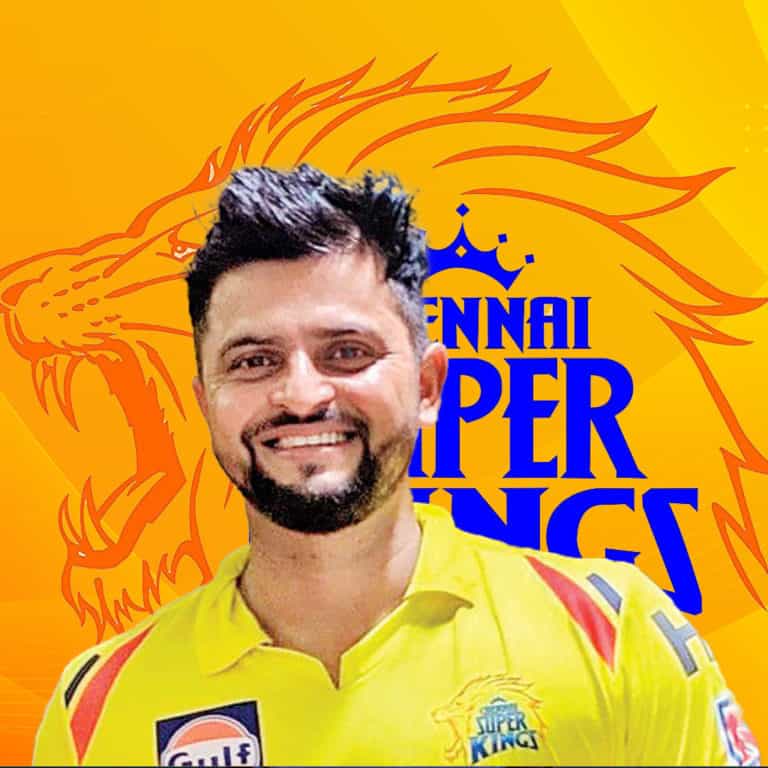 Suresh Raina (27 November 1986) is an Indian Cricketer who played for India in International Cricket and plays for Chennai Super Kings in the IPL.

He caught the selectors’ eye after his impressive performances in the 2004 U-19 World Cup and the U-19 Asia cup. His stellar performances also rewarded him his Ranji Trophy debut for Uttar Pradesh in February 2003 against Assam at the age of 16 but did not play another match until the following season.

His consistent performances in the Domestic Circuit led to his national call up in 2005.

Raina made his ODI debut on 30 July 2005 against Sri Lanka. After a fantastic start in the International Circuit but his form dipped over the next year which was followed by a serious injury in the latter part of 2007. He was also part of the 2011 Cricket World Cup-winning squad.

Raina was rested on the bench through the first half of the 2011 Cricket World Cup as captain MS Dhoni instead went with the in-form Yusuf Pathan in the playing 11. Raina got his opportunity in the group game against West Indies in which Raina played in place of Virender Sehwag who was injured.

In the quarter-final game against the defending champions Australia, Dhoni made a strategic move, by bringing in Suresh Raina in place of  Yusuf Pathan. Raina played a wonderful knock of 34 runs in a high-pressure game by assisting Yuvraj Singh to carry India to victory.

In the semi-final against Pakistan, he again proved his worth by scoring 36 runs to take India’s final tally to 260. Raina’s crucial knocks in the quarter-final and semi-final of the World Cup, helped India to win the 2011 ICC Cricket World Cup.

Raina was part of the 2015 Cricket World Cup as well and raked up some impressive performances and even scored a century against Zimbabwe in the last league match.

Raina was a crucial part of the middle order and in his prime form, he could score a quickfire 40-50 runs at the back end of the innings and also bowl a few economical overs and could provide breakthroughs for the team in crucial situations and was also an excellent fielder who could save crucial runs for his team on the field.

Raina is considered one of the greats in the T20 format. Raina made his T20 debut on 1 December 2006 against South Africa.

Apart from Raina, Skipper Virat Kohli (7833) and Rohit Sharma (7795) are the only two other Indian batsmen who are in the top 10 list of the highest run-getters in this format.

Raina made his test debut in July 2010 against Sri Lanka five years after his ODI debut. He scored a hundred on his Test debut.

Batting first, Sri Lanka declared their innings on 4/642 declared and India was in trouble at 4/241 Raina came in to join Sachin Tendulkar. He went on to reach his maiden century on debut becoming one of few Indian players to do so.

However, he could never really fit into the scheme of things of the Indian Selectors and eventually drifted from their radar. He played his last Test in the year 2015.

Raina was also the first Indian player to score a century in all three formats.

On 15 August 2020, Raina announced his retirement from all forms of international cricket alongside Mahendra Singh Dhoni who retired on the same day.

Suresh Raina is one of the finest players of the Indian Premier League. Raina was signed by CSK for a whopping US$650,000 (INR 4.55 Crores) for the first three years of the tournament. Raina has been a crucial asset for Chennai Super Kings over the years. He has scored over 400 runs in nine out of 12 seasons and is often called Mr. IPL. His dull season with the bat was in 2015 where he scored 374 runs. With around 5,368 runs under his belt, he is one of the top run-scorers in the tournament alongside Virat Kohli and Rohit Sharma. He is currently the tournament’s second-highest run-scorer. Averaging at 33.34, Raina has hit 38 fifties and one century, with an overall strike rate of 137.14.

Raina had missed his first-ever IPL match in the ninth season of the league due to the birth of his first child. He has also played for Gujarat Lions in the 10th edition of IPL and is often called ‘Chinna Thala’ by the locals of Tamil Nadu.

In 2020, Raina had returned to India from Dubai just before the start of IPL 2020. The reason for his return is still unknown but the star batsman is available for the franchise for the 2021 season and it will be a treat to watch him on the ground in the yellow jersey.