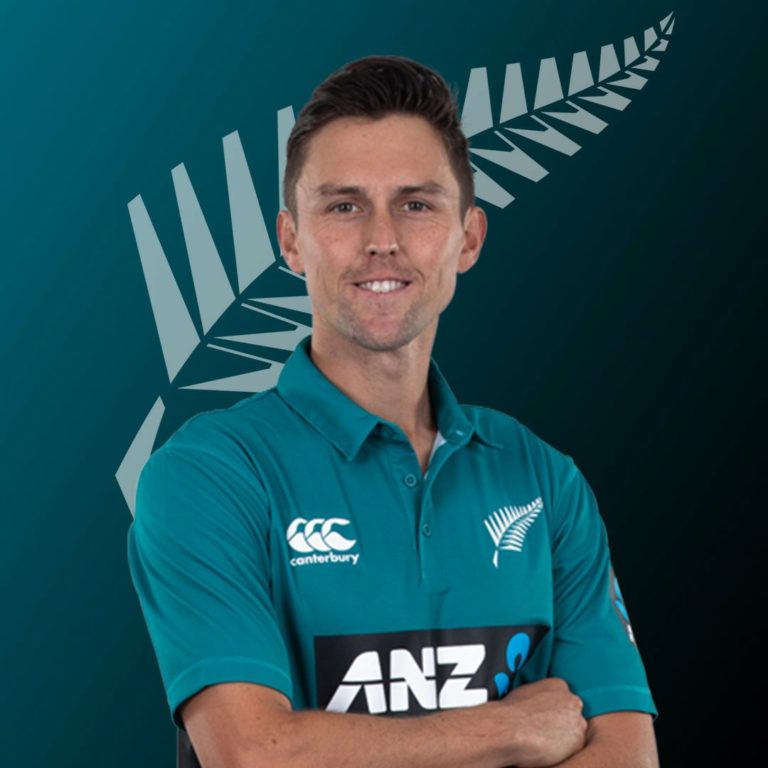 Trent Boult (born 22 July 1989) is an New Zealand Cricketer who plays for New Zealand in International Cricket and Mumbai Indians in the IPL.

Trent Boult accompanied the New Zealand A team on their training tour in 2007. On 9 February 2007, Boult picked up two crucial wickets by conceding 28 runs and scored seven runs not out against India’s Under-19 team. in February 2008, He travelled to Malaysia for the ICC Under-19 World Cup 2008.

On 21 January 2009, Boult was selected for his national side New Zealand in the ODI squad for the one-day series against Australia when he was 19 years old. Boult was the fastest bowler in the New Zealand team during the tour, with the highest speed of 143.3 km/h (89.0 mph).

Later in the series against West Indies, Boult won the man of the match award after taking his career-best figures of 10 for 80 in the second Test at the Basin Reserve. Boult also took a brilliant one-handed diving catch to his left to dismiss Dinesh Ramdin.

Later in the Trans-Tasman trophy 2015–16, In the series against Australia, in the third Test and the first-ever day-night Test in the game’s history, Boult became the first-ever New Zealander to take a five-wicket haul and second overall after Josh Hazlewood in a day-night Test. Eventually, Australia won the day-night match by three wickets. For his brilliant performances in 2015, Boult was named in the ICC World Test XI and ODI XI. He was again named in the World ODI XI by the ICC in 2017.

In 2018, Trent Boult produced his best-ever figures in Test cricket by taking 6/32 in the First Test against England’s visitors in Auckland. England was bowled out for just 58 runs in their first innings, and New Zealand won the Test by an innings and 49 runs. Boult was also named the man of the match for his brilliant performance with the bowl.

Trent Boult was New Zealand’s highest wicket-taker in the 2015 ICC Cricket World Cup and played a crucial role in getting his team in its final tournament. In June 2019, Boult became the first-ever bowler for New Zealand to take an ODI hat-trick in a Cricket World Cup.

In the series against Sri Lanka in august 2019, Boult became the third bowler from New Zealand to take 250 wickets in Test cricket.

ODI series against India in the 2018–19 New Zealand tour, Boult claimed his 5th five-wicket haul, the joint-most for New Zealand bowler alongside Richard Hadlee. New Zealand also recorded one of their biggest wins, and Boult was named the man of the match for his excellent performance.

After his brilliant performance in the 2015 ICC cricket world cup, Boult received a Maiden call-up into the Indian Premier League by the Sunrisers Hyderabad, and he was purchased for $600,000 ( INR 4.4 Crores).

In February 2017, Boult was picked up by the Kolkata Knight Riders team for the 2017 Indian Premier League for INR 5 crores. Boult then played for Delhi Capitals from 2018 to 2019 in the IPL.

Delhi Capitals then traded Boult to Mumbai Indians before the 2020 IPL. He played a crucial role in Mumbai, winning the 2020 IPL title. Boult was also the man of the match in the final and was also named the season’s cred power player for his brilliant performances in the power play. Trent Boult picked up 25 wickets in that season of the IPL and was the third-highest wicket-taker after Kagiso Rabada and Jasprit Bumrah. Boult also bowled four maiden overs in that edition, which was the most by any player in a single season of IPL. His best bowling figures in the IPL 2020 were 4/18 against CSK on 23 October 2020.