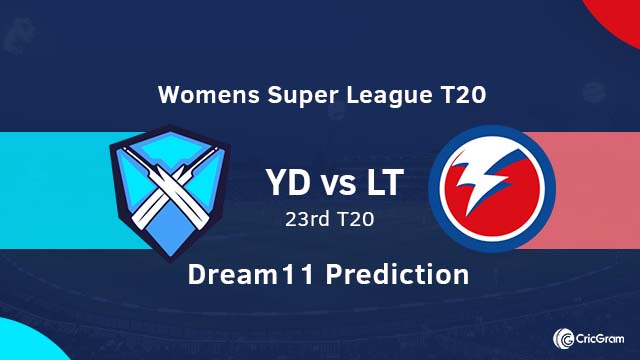 Yorkshire Diamonds and Lancashire Thunder will face-off in the 23rd match of Women Cricket Super League 2019 at North Marine Road Ground in Scarborough. We will provide YD vs LT Dream11 Team Prediction, Preview and Probable Playing XI for the match.

Lancashire Thunder is on the bottom end of the points table with six losses and is in inferior form. They lost their last match to Loughborough Lightning by 36 runs. Bowling first, Sophie Ecclestone took three wicket-haul while Kate Cross struck twice to restrict Lightning at 157. In the chase, Openers McGrath and Luus got good start scoring 30 and 26 but could not convert into a match-winning knock and ultimately reduced to 74/6. Thus, resulting in a 36-run loss for Thunder under the DLS method. Lancashire Thunder will hope to open their account tomorrow defeating Yorkshire Diamonds.

Yorkshire Diamonds are just above Thunder in the points table with two victories in seven encounters. They lost their last battle to Southern Vipers by three runs. Bowling first, Spin duo of Leigh Kasperek and Katie Levick bowled an excellent spell taking four and two wickets respectively to restrict Vipers at 127. Chasing the target, Skipper Winfield failed after another start while Hollie Armitage and Jemimah Rodrigues scored 34 and 32 apiece but were left behind by three runs. They will hope to keep their qualification chances alive defeating under-performing Lancashire Thunder tomorrow.

Pitch is expected to be neutral with an average total near 150.

A Healy is one of the best women batsman and wicket-keeper. However, She has been unable to replicate her international form here scoring only 142 runs in seven matches at a paltry average of 20.

E Threlkeld will bat way down the order and is an average performer.

Harmanpreet Kaur is a consistent performer. She has also scored 217 runs in 7 matches at an average of 36. She scored fifty in second last match.

After failing in first matches, Jemimah Rodrigues has scores of 58, 42* and 32 in last three games and is performing well in her debut series.

Skipper Lauren Winfield has scored 153 runs in seven matches and is a consistent performer.

Hollie Armitage is an excellent young talent and is scoring consistently with the bat. She has scored 191 runs till now including 34 and 24 runs in last two matches.

Georgie Boyce performed well in the first encounter opening the innings but now is demoted in the middle order. She can play tomorrow.

Emma Lamb is performing well for the team taking crucial scalps and scoring good cameos. She has taken nine scalps till now including one three wicket-haul.

Tahlia McGrath is a talented youngster but has not been at her best in this edition. She can open the innings and bowl a few overs of medium pace. T McGrath has scored 44 and 26 runs in last two matches.

L Kasperek is the leading spinner for Kiwis and can also be handy with the bat. She took four wicket-haul in the last match.

Sune Luus is a very attacking opening batsman and is efficient with her leg-spin also. However, She will not bowl enough overs. Luus scored 30 runs in the last encounter.

Sophie Dunkley Brown is an emerging talent and has played for England team also. She will bat in the middle order and can bowl a few overs of medium pace. Brown is yet to make a significant mark this season and got out on a duck in last two matches.

Sophie Ecclestone is one of the best spinners in women’s cricket currently and can also do late hitting for the team. She has taken ten wickets till now including three scalps in the last match.

Skipper Kate Cross has performed well for England team and is leading the pace attack of Lancashire Thunder. She has taken nine scalps till now.

A Davidson-Richards will bat in the middle order and can bowl her quota of overs. She can be a grand league winner for you on her day.

Talented spinner Linsey Smith can chip in with crucial wickets. She has also played for England team.

Katie George is a good pacer and can also be handy with the bat. She generally bowls well.

Katie Levick has performed exceedingly well this season and has struck twice in the last two matches.

Experienced Beth Langston is a good pace bowling all-rounder but does not perform well generally.

If you liked Yorkshire Diamonds vs Lancashire Thunder Dream11 Prediction, Then follow us on Twitter for Dream11 Team and Fantasy Cricket Tips. You can also find us on Facebook.