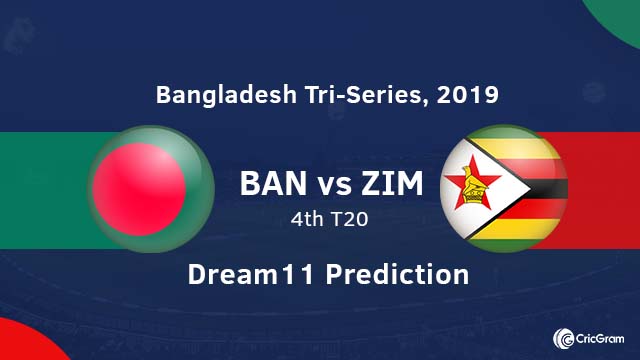 BAN vs ZIM Dream11 Prediction, Preview and Probable Playing XI of the 4th match of Bangladesh Tri-Series 2019. Zimbabwe and Bangladesh will face-off in the fourth encounter of the T20I Tri-series at Zahur Ahmed Chowdhury Stadium, Chattogram.

Team Bangladesh has been lacklustre in recent times losing to Afghanistan in the last T20I and also a disappointing display against Zimbabwe in tri-series opener. To freshen up the things, They have made quite a few changes in the squad removing Soumya Sarkar after continuous failures. Along with him, Mahedi Hasan, Yeasin Arafat and Abu Hider have also been removed from the team without getting any opportunity to play. They have added batsman Mohammad Naim and Nazmul Hossain Shanto into the team along with leg-spinning all-rounder Aminul Islam and pace duo of Rubel Hossain, and Shaiful Islam. They will be eager to put a unison effort tomorrow and defeat Zimbabwe comprehensively.

Team Zimbabwe has shown a good fight in this series despite recent setbacks. However, A more significant challenge awaits them tomorrow as it will be a must-win for them to stay alive in the tri-series. The onus will be on the top order to put a splendid effort with bat and give an excellent start to the team. T Mutombodzi, Ryan Burl and R Chakabva are performing their role as a finisher to perfection. More importantly, The pace duo of Kyle Jarvis and Chatara will have to chip in with crucial wickets for the team. There will also be a lot of expectations from star all-rounder Sean Williams to put a good show with the bat as well as the ball. They will hope to give a tough challenge to hosts Bangladesh tomorrow.

As per the initial report, A more batting-friendly surface can be expected at Chattogram as compared to Dhaka.

Pacers are likely to be in wickets while Spinners can also find some turn later in the innings.

Scattered Thunderstorms are predicted during the day, but hopefully, a full encounter is likely to take place.

Mushfiqur Rahim is the backbone of Bangladesh batting line-up and is in a consistent form. He can also score at a reasonable strike rate but has failed until now in two matches.

Brendan Taylor is the best batsman among Zimbabwe team and performs consistently. He is likely to open the innings and will be a must pick in ZIM vs BAN Dream11 team and scored 27 runs in the last match.

Liton Das can open the innings and is a reliable batsman. He can anchor big innings. However, He failed in both the matches.

Craig Ervine is a consistent performer for Zimbabwe cricket and has an average of 25 in T20I. His recent form is also good but failed in both the matches.

Hamilton Masakadza is a veteran opener for Zimbabwe but has entirely failed from past one year. He scored 34 runs in the first T20I.

Mahmadullah is an attacking middle-order batsman but does not perform consistently. He scored 44 runs in the last match.

Sabbir Rahman is a lower middle-order batsman. You can prefer him if you think Bangladesh top-order will collapse. He scored 24 runs in the last match.

Afif Hossain is an attacking batsman and useful spinner. He took three wickets in practice match and scored match-winning knock of 52 runs in the first T20I.

Shakib Al Hasan is in the form of his life and was one of the top scorers of World Cup 2019. He also can destroy Zimbabwe line-up with his witty spin. He took two wicket-haul in the last match. Shakib is a good selection as Captain for Zimbabwe vs Bangladesh Dream11 Team.

Sean Williams is a brilliant all-rounder and a genuine match winner from both the departments. He took two scalps in the last match.

Mosaddek Hossain has performed well in recent times as a finisher and can also bowl a few overs of spin. He scored 30 runs and took one scalp in the first T20I.

Ryan Burl is a talented spinner and can also score runs with the bat. He scored 57* and 25 runs in two matches.

Mustafizur Rahman took a plethora of wickets in WC’19 and will hope to continue his form in the tri-series. He is a must pick in ZIM vs BAN Dream11 team and bowled good spell in both the matches.

M Saifuddin is a wicket-taking pacer and can also be handy with the bat. He took brilliant four wicket-haul in the last match.

Pace bowler Kyle Jarvis will lead the pace attack of Zimbabwe and can also score few runs with the bat. He took two scalps in the first match.

Tendai Chatara is a lethal pacer but has not found much success in the T20I format. However, He has struck twice in both encounters and is looking in right touch.

Taijul Islam is an outstanding spin bowler and can take plenty of wickets with his economical bowling. He can be a risky pick for tomorrow.

If you liked Bangladesh versus Zimbabwe Dream11 Prediction, then follow us on Twitter for Dream11 Team and Fantasy Cricket Tips. You can also find us on Facebook.