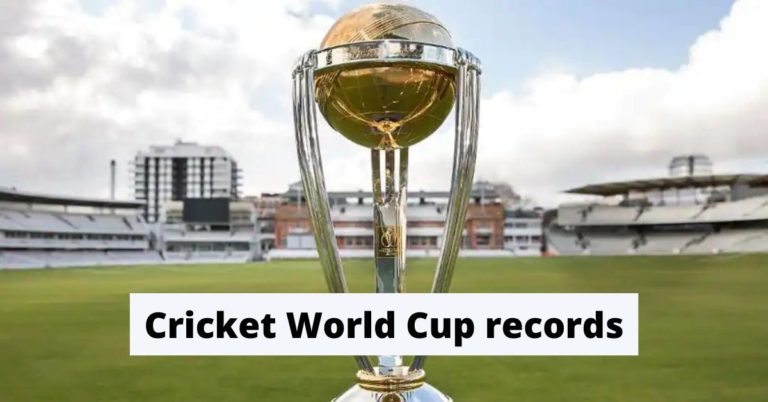 In this article, we will discuss the Top 10 Cricket World Cup Records which are hard/impossible to break for at least a few years from now. We will give all the details of the world cup records including date, opposition, and everything else.

Today, we will discuss some World Cup records created by the team/player which are very hard to break.

10. Most World Cup appearances for their nation

India’s Sachin Tendulkar and Pakistan’s Javid Miandad hold the record for the most number of appearances in the 50-over cricket World Cup. Both of them have represented their teams six times.

Sachin Tendulkar is regarded as the best player to ever play for India whereas, Javid Miandad is also regarded as of the finest players to play for Pakistan. Tendulkar is also the leading run-scorer in the World Cups as well as one-day internationals.

Kevin Joseph O’Brien of Ireland holds the record for the fastest century in a World Cup and scored it in as less as 50 balls. The century came against England on March 2, 2011. This match is also one of the greatest matches in the history of Irish Cricket as they beat mighty England in the World Cup.

Brien scored 113 runs off 63 runs and won the match single-handedly for his team. Glenn Maxwell is the second on the list with 51 balls.

His knock of 237* included 24 fours and 11 sixes and is certainly a record that is hard to break. He achieved this feat by breaking Chris Gayle’s previous record of 215 runs.

7. Double Hattrick in a World Cup

The legendary Lasith Malinga of Sri Lanka holds the record of picking up 4 wickets in 4 balls in a World Cup. He achieved this feat in the 2007 World Cup against South Africa. His 4 wickets included Shaun Pollack, Andrew Hall, Jacques Kallis, and Makhaya Ntini. This double hattrick of Lasith Malinga stands 7th on our list of top 10 Cricket World Cup Records.

Shoaib Akhter of Pakistan holds the record of the fastest delivery bowled in a world Cup. Akhter was a world-class bowler at his peak and had created fear in some world-class batters.

He clocked 161.3 kmph/100.2 mph in the 2002 World Cup against England. This is also the fastest delivery ever bowled in the history of the sport.

Kapil Dev was the youngest Captain to win the World Cup in 1983. He is regarded as one of the best all-rounders to ever play for India and became a household name after winning the famous 1983 World Cup at Lords against West Indies. Kapil was only 24 years old when he lead India to their first-ever World Cup.

4. Most Number of Centuries in a single edition of the World Cup

Rohit Sharma was at his peak during the 2019 World Cup and was unstoppable with the bat at the top for India. He scored 5 centuries in the 9 games and was also the leading scorer in the World Cup and scored 648 runs at an average of 81 and strike rate of 98.33.

3. Highest score by a team

Australia holds the record of the highest first innings total ever in the World Cup. In the 2015 World Cup, Australia scored 417 runs at the loss of 6 wickets against Afghanistan at Perth and is certainly a difficult record to break in the coming years.

David Warner was their top scorer in that game and scored 178 runs off 133 balls. His knock included 19 fours and 5 sixes.

2. Highest Winning Streak by a team in the World Cups

1. Most Number of World Cup titles

Also Read : Top 10 Best Fielders in the World – Who is World’s best fielder?