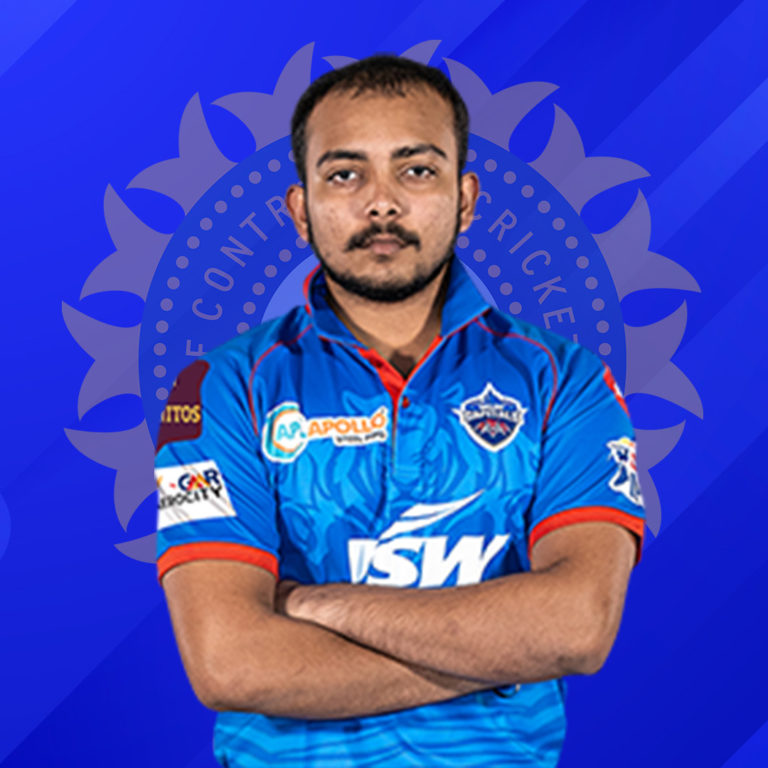 Prithvi Pankaj Shaw (9 November 1999) is an Indian Cricketer who plays for India in International Cricket and plays for Delhi Capitals in the IPL.

In April 2012, Shaw received an invitation from the Cheadle Hulme School in Manchester, England. He scored 1,446 runs with the bat at a brilliant average of 84 and also picked up 68 wickets with the ball during his two-month stay in Manchester.

He also played for Yorkshire ECB County Premier League in 2014 and piled up some impressive performances. In 2016, Shaw was part of the Indian U-19 team that won the Youth Asia Cup in Sri Lanka.

In January 2017, Shaw finally made his first-class debut for Mumbai in the Semifinals of the 2016-17 Ranji Trophy against  Tamil Nadu and scored a brilliant century in the second innings.

Later, in the same year, he also made a record by becoming the youngest player to score a century on his Duleep Trophy debut. He has so far played 25 first-class games and has scored 2263 runs at an average of  51.43.

In September 2017, Shaw was named the captain in the Indian squad for the ICC U-19 Cricket World Cup 2018. He impressed everyone with his performances with the bat in the tournament and also led India to win the U-19 World Cup.

His impressive performances in the U-19 World Cup also earned him an IPL contract with the Delhi Capitals. In the 2021 Vijay Hazare Trophy, Shaw was outstanding and became the first batsman to score 800 plus runs in a season in the competition’s history.

After his impressive show in the IPL and domestic circuit. Shaw finally got a call up for the national team. He was in India’s Test squad for the final two tests against England in 2018 but did not get any opportunity to play.

A month later, in September 2018, Prithvi Shaw made his test debut for India against West Indies in the home series on October 4, 2018, at Rajkot. He smashed a brilliant century on his debut and became the second-youngest player to score a century on their Test debut.

Shaw was also part of the Indian test squad for their away series against Australia in 2018 but was out of the series as he was injured in a warm-up match. In 2020, he was again selected for the test series against New Zealand. Unfortunately, he didn’t have a good time there and scored just 98 runs from his two games.

In 2020, he again received a call-up for the Test series against Australia. This time around, Shaw performed badly with the bat and scored just one run in the first game and was dropped from the next game. He received criticism for his technique from all the experts.

Shaw has so far played 5 test matches for the country and has scored 339 runs at an average of 42.

After recovering from his injury, Shaw was selected in the ODI squad for their series against New Zealand in 2020. Shaw made his debut on February 5, 2020, at Hamilton. He managed to score just 20 runs on his debut. Shaw played all three games in the series and managed to score just 84 runs with an average of 28.

In 2021, After his outstanding show in the IPL, he was selected for the limited-overs series against Sri Lanka and is likely to make his T20 Debut in July 2021.

After his brilliant performances in the 2018 U-19 World Cup. Prithvi Shaw was bought by the Delhi Capitals for a whopping price of INR 1.2 crores for the 2018 IPL season. He made his IPL debut against Punjab Kings on 23 April 2018.

Shaw smashed 245 runs from his 9 games at a brilliant strike rate of 153.12. He then played all the games in 2019 and played some match-winning knocks for the franchise.

In 2020, Shaw was in and out of the playing XI because of his dull performances with the bat. After working hard on his technique. Shaw made a statement by performing extremely well in the 2021 edition of the IPL and made a record by scoring 24 runs in the first over of an innings against Shivam Mavi league stage game against Kolkata Knight Riders.

Prithvi Shaw has played 46 IPL games so far and has scored 1134 runs at a decent average of 24 and has also notched up nine half-centuries. His ability with the bat is high rated and expected to be a bright prospect for the country in the coming years.