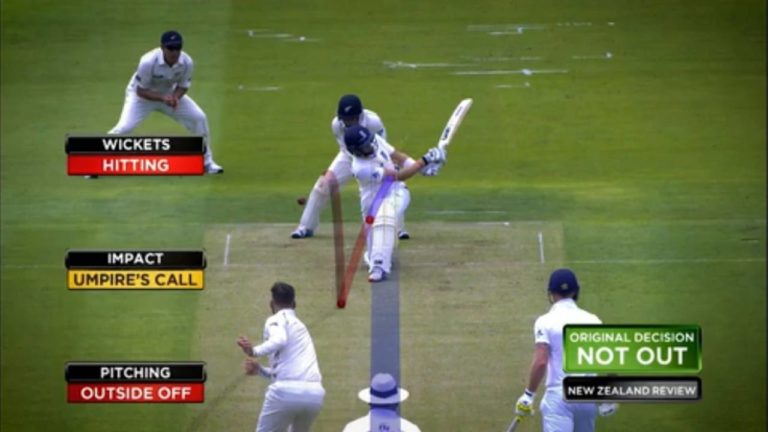 Technology in Cricket has played a massive role in the last decade or so. Today, In this article, we will discuss DRS in Cricket?, DRS Rules, What is the full form of DRS? Umpire’s Call and much more.

To begin with, the full form of DRS is Decision Review System. DRS first came into the picture in November 1992. This technology was first introduced only in Test cricket, and the main purpose of this was to review the decisions made by the on-field Umpire.

History of DRS (Decision Review System) over the years

Back in the time, there were many controversial decisions made by the on-field umpire and the introduction of DRS was a blessing for the players. A Sri Lankan Lawyer named Senaka Weeraratna was the first person to suggest something like this in Cricket.

The test match between India vs Sri Lanka in 2008 was the first game where DRS was used and was later made official by the International Council of Cricket (ICC) in November 2008.

The ICC also made some modifications on the lbw calls by increasing the margin of uncertainty in October 2012 but was later again reduced in July 2016. In February 2017, the ICC made it clear that all the upcoming ICC World T20 tournaments will have one DRS review for each team in their innings.

In November 2017, ICC also made it very clear that “A team will now not lose a review for an Umpire’s call on an lbw decision”. Now, if you are wondering what is an Umpire’s call? do not worry we will discuss it in brief later in the article.

In 2020 due to the covid pandemic, ICC was unable to send neutral umpires due to traveling challenges, and hence the number of reviews was increased from 2 to 3 per innings in a test match.

The Decision Review System (DRS) is a technology that is used in Cricket. It may be opted by both players and on-field Umpires in any game format, whether it is Test Cricket, ODI, or T20Is. Since the introduction of DRS in Cricket, the game has been revolutionized.

It is majorly used for lbw (Leg Before Wicket) calls by players, and The Decision Review System (DRS) is a technology that is used in Cricket. It may be opted by both players and on-field Umpires in any game format, whether it is Test Cricket, ODI, or T20Is.

It is majorly used for lbw (Leg Before Wicket) calls and caught behind appeals by players. Virender Sehwag was the first cricketer in the world to be dismissed by the DRS.

Former Indian Wicketkeeper MS Dhoni is regarded as the King of DRS as he was the most accurate in opting for DRS reviews. The DRS decision is made by the third Umpire with the help of different camera angles, hawkeye technology, and ultra edge or Hotspot.

The Different components used in the Decision Review System by the third Umpire is discussed below:

There are some specific DRS rules such as the number of reviews given to each team in different formats of the game. We will breakdown the rules of all the formats below

As of 2021, Similar to test cricket the number of reviews per inning has been temporarily increased to two from one due to the covid 19 pandemic.

As of 2021, each team is provided with one DRS review per innings and is widely used across many T20 tournaments and leagues. The 2018 IPL season was the first IPL season to use DRS. The 2021 ICC T20 World Cup, which will be played in October and November, is the latest tournament that will have the DRS.

What is Umpire’s Call

The Umpire’s call is one of the most controversial and the talking point of the DRS. Umpire’s call means that the on-field Umpire is given the benefit for any lbw call. If the ball hits the stumps marginally or less than 50%. To overturn an Umpire’s call, the ball needs to hit the stumps more than 50%.

How does the Umpire’s call actually work

If the bowling team appeals for an lbw and the on-field and the batsman decides to review the call, but if the ball-tracking shows Umpire’s call when hitting the stumps, then the batsman has to go back to the hut, but at the same time, the batting team does not lose a review.

How many DRS Reviews are given to each team per innings in T20I, ODI, and Test Cricket?

How many DRS reviews are given in IPL?

Each team receives one DRS review per innings in IPL. The 2018 edition of the Indian Premier League was the first season of the IPL where DRS was used.

Who was the first to be given out by the use of DRS?

Former Indian opener Virender Sehwag was the first batsman to be given out by the DRS in a test match against India and Sri Lanka in 2008.

What is the Full form of DRS?

Who is known as the King of DRS?

Former Indian wicket-keeper MS Dhoni is known as the King of DRS for his accurate calls behind the stumps.