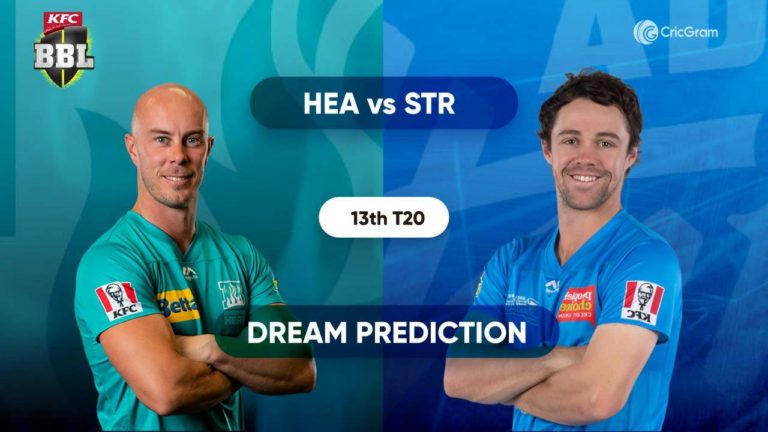 Hello and welcome to our HEA vs STR Dream11 Prediction, Probable Playing XI, and Fantasy Cricket Tips. Brisbane Heat and Adelaide Strikers will be played in the 13th match of the Big Bash League 2020-21 at The Gabba, Brisbane.

Heat is having a tough time so far this season as they have lost both the games and are currently at the bottom of the points table. In the last match, they put up a good performance but had to face disappointment as they lost the match by four wickets.

The team’s batting department, which was the main reason for the loss of the first match, performed well in the second match. Max Bryant and Sam Heazlett gave a good start which was further carried by the skipper Chris Lynn as he scored a quick fifty.

Jack Wildermuth was the best performer for Heat as he scored quick 31 runs in the end and picked up 3 wickets. Except for Wildermuth and Mujeeb Ur Rahman, all the other bowlers were expensive, and as a result, they had to face the loss.

The Heat players are yet to find their rhythm as they have not been able to perform as a team. Individual performance has been better, but they have failed to deliver as a team. Heat needs to find the right balance or else it will be challenging for them in further matches.

Adelaide Strikers have managed to win one match out of the three played so far and are currently at the 4th position on the points table with a total of 5 points. In the last match, they had to face disappointment as they lost the match by 38 runs.

The bowling performance, which was brilliant in the 2nd match, could not perform up to the mark in the last match, and the bowlers went for a good amount of runs.

Peter Siddle who had picked up a fifer earlier was slightly expensive, and Rashid Khan also bowled decently. Except for Daniel Worrall, all the other bowlers did not perform well.

The opening batsman, Phil after a disappointing performance in the two matches, played well in the last match and Jake Weatherald also played decently giving a good start to the team. The other batsman couldn’t score runs and got out early, Jon Wells scored runs but batted very slowly.

Strikers have been performing decently in their bowling department, but their batting line-up has not been up to the mark, and they need to work on it if they want to win further matches.

The pitch is considered to favour fast bowlers as it offers perfect bounce and the batsman can also play good shots if they can handle the pace and bounce.

Lynn needs no introduction and is known for his hard-hitting all around the globe. He batted well scoring 69 runs from 44 balls in the last match.

Bryant is known for his attacking cricket and will open the batting for his team. He scored 29 runs in the last match.

He is a young right-arm off-break bowler and has played several leagues across the globe. Mujeeb bowled well in the last match and picked up 1 wicket.

He is a bowling all-rounder and is also very good at playing big shots. In the last match, he scored 31 runs from just 11 balls and picked up 3 wickets for just 23 runs.

Ben Laughlin is their key pacer leading the pace attack and is an excellent bowler in the T20 format. He was very expensive in the last match and also went wicketless.

He will open the innings with Max Bryant and will play attacking cricket in the powerplay. Sam scored 20 runs in the last game.

Lawrence is a youngster who will bat in the middle order and is known for his aggressive nature. He scored 20 runs but did not get to bowl in the last match.

He is a left-handed batsman and generally opens the innings for the team. In the last match, he batted decently scoring 27 runs from 15 balls.

He is a young right-handed batsman and generally opens the innings alongside Weatherald. He scored 28 runs from 16 balls in the last match.

He is also a left-handed batsman and can also bowl a few overs of spin if required. Renshaw scored only six runs and has looked out of form so far in this season.

He is one of the top leg-spinners globally and can also play some big shots down the order. Rashid Khan bowled decently in the last match and picked up one wicket.

Siddle is a veteran right-arm fast bowler and will be leading the pace attack of the team. In the last match, he went wicketless and was slightly expensive. Siddle has a fifer already in this season.

He is a right-arm fast bowler and consistently picks up wickets. Agar was expensive in the last match but managed to pick up 2 wickets. He has picked up wickets in every match so far in this season.

He is a middle-order batsman and is an excellent striker of the ball. Wells scored only 36* runs from 38 balls in the last match.

He is a right-arm fast bowler and bowls at a good pace. In the last match, Worrall bowled brilliantly picking up 2 wickets for just 12 runs.