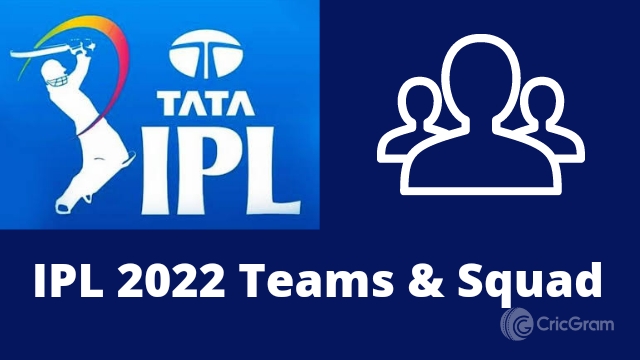 The World’s biggest T20 cricket league, IPL is going to start on March 26th, 2022. The Indian Premier League was established by BCCI in 2007 and even after 14 years, the madness for IPL has kept on increasing with each season.

This time, it will be even more exciting as the two new teams, Gujarat Titans and Lucknow Super Giants will participate in the IPL. In this article, we have covered all the IPL 2022 teams, and the IPL 2022 players list along with their prices.

As the number of teams has increased from this season, the teams have been divided into two groups to accommodate the schedule and reduce the players’ workload.

The most successful team in the history of IPL, Mumbai Indians, did a decent job in the auction. They bought some brilliant players for a high cost but failed to grab the opportunities to get some players at a reasonable price.

Rohit Sharma, who had led the team to five title wins, will continue as the captain this season, and one of the finest Indian bowlers, Jasprit Bumrah, was retained for 12 Crores. The remaining two retained players are the middle-order batsmen Suryakumar Yadav and Kieron Pollard, who played many match-winning knocks.

Mumbai Indians have invested mostly in the young Indian players for the IPL 2022. Ishan Kishan, the wicket-keeper batsman, was sold to a whooping 15.25 Cr who started with a base price of 2 Cr. The other player who was sold over 1 Cr is the all-rounder, Tilak Varma, and the bowlers, Murugan Ashwin and Jaydev Unadkat.

The major purchases were made for the Foreign players, especially the all-rounders like Tim David and Jofra Archer. The South African U-19 star batsman Dewald Brewis was bought for 3 Cr. The other important foreign players are Daniel Sams, Tymal Mills, Riley Meredith, and Fabian Allen.

Chennai Super Kings, under the leadership of MS Dhoni, has won four IPL titles, most after Mumbai Indians. In the mega auction, CSK repurchased most of their old players to maintain the core of the team but couldn’t afford to get back some star players like Faf du Plessis and Shardul Thakur back in the team.

One of the most successful captains in world cricket, MS Dhoni, will continue to lead his side. Most of them believe that this might be his last IPL season as a player. That is why Jadeja was the 1st player to be retained. Moeen Ali and Gaikwad are the other two players who were retained before the Mega Auction.

Deepak Chahar is the most expensive player bought by CSK in IPL 2022 Mega Auction. The previous teammates Ambati Rayudu, Robin Uthappa, N Jagadeesan, and KM Asif were bought back into the squad. Rajvardhan, Prashanth Solanki, and Shivam Dube were some interesting purchases.

Dwayne Bravo and Mitch Santner have been rebought into the team, and Devon Conway is the only foreign batsman. Chris Jordan, Adam Milne, Chris Jordan were bought at reasonable players and will play a crucial role in the bowling department.

Royal Challengers Bangalore has been one of the most supported teams in IPL, despite not winning a single title so far. Virat Kohli announced in the previous season that he would no longer be the captain of the team, and Ab de Villiers has retired from all formats of cricket. This season the veteran right-handed batsman, Faf du Plessis, will be leading the Royal Challengers Bangalore.

RCB retained only three players ahead of the IPL 2022 Mega Auction. Virat Kohli and Glenn Maxwell were the obvious choices for retention. They also retained Siraj but let go of Yuzvendar Chahal, who was one of the biggest assets of the team.

It appeared that the RCB did not invest much in the Indian Players in the IPL 2022 Mega Auction. The previous season leading wicket-taker, Harshal Patel, was bought for a huge price of 10.75 cr, and the other expensive players are Dinesh Karthik and Anuj Rawat.

A major amount of RCB’s purse was spent buying foreign players. There was a lot of discussion about Wanindu Hasaranga getting sold for over 10 Crs. Faf du Plessis and Josh Hazlewood were also slightly expensive for Royal Challengers Bangalore.

Kolkata Knight Riders have a decent record in IPL as they have won the title twice and were the runner-ups in the previous season. But there will be a lot of changes in the IPL 2022 squad compared to the last season as they have a new captain in the form of Shreyas Iyer. KKR might have let go of some big names from the team, but they managed to buy some good players in the IPL 2022 Mega Auction.

KKR focused mostly on retaining the all-rounders, especially Andre Russell and Venkatesh Iyer, who can cause havoc with the bat. The two mystery spinners, Narine and Varun, were also part of retained players.

Kolkata Knight Riders bought four Indian players who cost them a lot, and they could not buy better players in the rest of the IPL 2022 Mega Auction. Shreyas Iyer, Nitish Rana, Shivam Mavi, and Umesh Yadav are the top buys for KKR.

A majority of their purse was spent on some Indian players, so they couldn’t afford to bid for many foreign players. But they managed to get players like Pat Cummins, Tim Southee, Sam Billings, and Alex Hales. But Alex Hales has opted out of the IPL 2022 due to bio-bubble fatigue. Aaron Finch has been named as his replacement

Sunrisers Hyderabad has won a title once in 2016 and has managed to qualify for the playoffs every time except for the last season. They had a complete revamp of the squad as the only big player they retained was Kane Williamson. They would be hoping to turn around things this season as they had a horrible time in the previous season of IPL.

Kane Williamson will lead the side this season and the two youngsters from Kashmir,  Abdul Samad and Umran Malik who have shown a lot of potential were retained before the IPL 2022 Mega Auction.

Sunrisers Hyderabad spent more on the all-rounders and bowlers than the batters in the IPL 2022 Mega Auction. They bought back their pace-duo Bhuvneshwar Kumar and Natarajan and Abhishek Sharma’s all-rounder. Rahul Tripathi, Washington Sundar, and Kartik Tyagi are the other expensive Indian players on the team.

They covered the quota of batters by buying a good deal of foreign players like Pooran, Markram, and Glenn Phillips. They have a Caribbean all-rounder in the form of Romario Shepherd, and they invested in two pace bowlers, Marco Jansen and Sean Abbott.

Delhi Capitals consists mostly of youngsters who have shown a lot of grit, determination, and courage and have consistently qualified to the playoffs in the past few seasons but have failed to win the trophy. They have released some big players like Dhawan, Iyer, and Rabada but bought some good players like Warner, Shardul, and Mitchell Marsh.

Rishab Pant will be leading the team in IPL 2022 and will be determined to win the title this year with many good players in his squad. The all-rounder, Axar Patel, and the opening batsman, Prithvi Shaw were the other retained Indian players and Anrich Nortje is the foreign player who was retained.

Delhi Capitals bought players in all the departments, but their most expensive player is Shardul Thakur, with a price of 10.75 Cr. The bowlers like Khaleel Ahmed, Sakariya, Kuldeep Yadav, and Nagarkoti cost a bit more to Delhi Capitals.

Delhi Capitals did not spend much on the foreign players’ quota yet they managed to get good players at a reasonable cost. David Warner and Mitchell Marsh are the top players in the Foreign players’ lot.

Rajasthan Royals was considered one of the strongest teams in the initial seasons of IPL as they were the first team to lift the IPL trophy. But things went downhill after that, and they have not been able to perform consistently. They would have lost players like Jofra Archer Karthik Tyagi in the IPL 2022 Mega Auction, but they managed to buy brilliant players like Prasidh Krishna, Trent Boult, and Devdutt Padikkal.

Sanju Samson will be leading the side in IPL 2022, and he has the support of the experienced T20 player Jos Buttler and the young Jaiswal, who was retained before the IPL 2022 Mega Auction.

Rajasthan Royals did a decent job buying the foreign players. Trent Boult and Shimron Hetmyer were the expensive foreign players, but they got Nathan Coulter-Nile, Neesham, Obed McCoy, and van der Dussen at a reasonable price.

Punjab Kings has not performed up to the fans’ expectations in all the seasons of IPL as they are yet to win a title. This season, they let go of their skipper KL Rahul and retained only two players, Mayank Agarwal and Arshdeep Singh.

Mayank Agarwal has been responsible for leading the team this year. He will be dealing with a completely new squad this season as the franchise released all the old players before the IPL 2022 Mega Auction.

Punjab Kings spent slightly more on the all-rounders than batters and bowlers. Sharukh Khan was the most expensive player with 9 Cr, and Shikhar Dhawan Rahul Chahar was the other expensive player. Harprit Brar and Vaibhav Arora were the costliest buys among the uncapped players.

Punjab Kings went all-out on the foreign players as they bought Livingstone for 11.50 Cr and Kagiso Rabada for 9.25 cr. They got good players like Livingstone and Odean Smith at a reasonable price.

Gujarat Titans are the new franchise that has been added from IPL 2022. The team is based in Ahmedabad, Gujarat. As they are a new franchise and they do not have the option to retain players, so they had the choice to draft a few players ahead of the IPL 2022 Mega Auction.

Hardik Pandya will lead Gujarat Titans in their initial season, and they have got two brilliant players, the world-class spinner Rashid Khan and a young talented batsman, Shubman Gill.

Gujarat Titans appeared to have made some wrong calculations during the IPL 2022 Mega Auction as they couldn’t pick the right players for the right amount. The most expensive player was Rahul Tewatia at 9 Cr. But they got Mohammad Shami at a reasonable price.

Gujarat Titans bought some good foreign batsmen and bowlers but failed to buy even one all-rounder. On the paper, the Gujarat Titans look like a little imbalanced squad, but only time will tell how they will perform in the upcoming IPL 2022. Moreover, Jason Roy has announced that he will not be part of the Gujarat Titans squad in IPL 2022 due to personal reasons and the Afghanisthan batsman Rahmanullah Gurbaz has been named as his replacement.

One of the world’s best T20 batters, KL Rahul, will be the captain of Lucknow Super Giants. The all-rounder Marcus Stoinis and the young Indian Spinner Ravi Bishnoi are the other drafted players.

Lucknow Super couldn’t buy proper Indian players in the IPL 2022 Mega Auction. The most expensive players were Avesh Khan at 10 Cr and Krunal Pandya at 8.25 Cr. They got Deepak Hooda and Manish Pandey at slightly high prices.