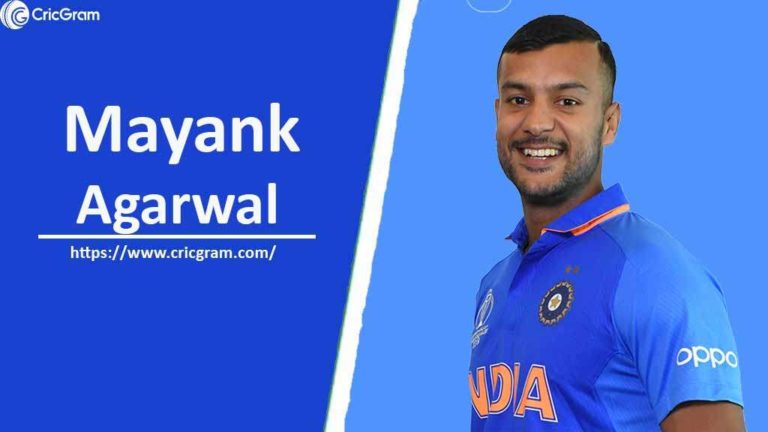 Mayank Agarwal is an Indian International Cricketer who is mainly known to play in International Test cricket and he is a top-order batsman, Mayank belongs to the Karnataka state of India and he plays the Domestic Cricket for his Karnataka Cricket Team.

By the way, Mayank had debuted in World famous T20’s league (IPL) in 2011, but he had got an opportunity to play for India’s International Team after 7 years later, and he played in Domestic Cricket in 2008 for the first time. And since then he is still a part of Karnataka’s Domestic Cricket Team, and is also part of ‘IPL, India International Test and ODI Team’, and play cricket.

Mayank Agarwal came into the media headlines when he hit his first triple century in First Class Cricket against the Maharashtra team in 2011, And after that, he praised him in the entire cricket world.

Mayank’s father is Anurag Agarwal, which is a businessman, And his business is related to health care Natural Remedies. And the mother’s name of Mayank is Suchitra Singh, which is a housewife.

Mayank completed his initial education from ‘Bishop Cotton Boyz School of Bangalore. After that, he has completed further education from ‘Jain University, and there were two childhood friends ‘KL Rahul and Karun Nayar’. And as you know that both of their partners have also played for the Indian International Cricket team, and KL Rahul is still part of the Indian International team.

Mayank has been married in June of 2018, with his childhood friend and loves Aashita Sood, without spreading news in the media, and currently, Mayank and Asita live in Mumbai.

Mayank Agarwal has done Debuts in Indian International Cricket on December 26, 2018, with Test cricket and had a chance to play against the Australia team for the first time in the ground of Melbourne. And in this Test debut match, he scored 76 runs.

And he has done his ODI International debut on 5 February 2020 against New Zealand.

Mayank Agarwal had done his debut in his first-class cricket in 2008-09, and the same year was selected in the Under-19 World Cup and he was the Highest run-scorer of that World Cup.

After seeing the good performance of Mayank Agarwal in Karnataka First Class Cricket, BCCI kept them in the IPL auction in 2011, and they included in RCB’s team on their base prices, and he was part of rcb team for 3 years IPL season, And so far, in his IPL career, they are part of four IPL franchisees Teams ‘Royal Challengers Bangalore, Delhi Daredevils, Rising Pune Supergiant and Punjab Kings’ And he is currently Captain of Punjab Kings in the IPL season of 2022.

Q. What is the ODI T-Shirt No of Mayank Agarwal?

Ans: In the international one-day matches of Mayank Agarwal, their jersey number is 16.

Q. How many centuries did Mayank Agarwal have?

Ans: Mayank Agarwal has so far 4 hundred in his entire cricket career.