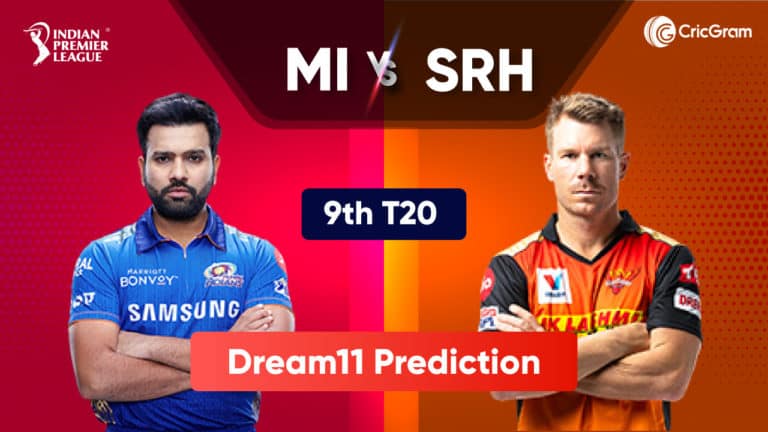 Mumbai Indians and Sunrisers Hyderabad will be played in the 9th match of IPL 2021 at MA Chidambaram Stadium, Chennai. We will cover MI vs SRH Dream11 Prediction, Probable Playing XI, and Fantasy Cricket Tips.

Mumbai Indians have performed reasonably well as they have won one out of the two matches so far in this season and are currently at the 2nd position on the points table.

The bowlers performed very well in the last game, and as a result, they won the match by ten runs.

Quinton de Kock replaced Chris Lynn and opened the innings but got out early. Rohit Sharma batted well but was unlucky to miss fifty by just seven runs. At No.3, Surya Kumar Yadav has been batting consistently and scored a half-century in the last match.

In the middle-order, Ishan Kishan, after a decent performance in the first match, got out early in the second. Hardik Pandya and Krunal Pandya have appeared to be struggling to score runs so far in this season. Krunal Pandya played a decent cameo in the last match.

The bowling department has been very professional in both matches. Rahul Chahar was brilliant in the last game as he picked up four wickets and changed the game course. Krunal Pandya and Trent Boult have been consistently picking up wickets for MI so far in this season. Jasprit Bumrah bowled well but was unlucky as he did not pick up any wickets.

Mumbai Indians would be high on confidence and would like to maintain the winning streak by putting up a good performance against SRH.

Sunrisers Hyderabad has had a tough time so far in this season as they have lost both the matches and are currently at the 7th position on the points table. They had a perfect chance of winning the last game, but their middle-order did not perform well and, as a result, lost the match by six runs.

Wriddhiman Saha once again got out early without scoring much, but Warner batted brilliantly, scoring a fifty. Manish Pandey has been scoring runs consistently, but he has been very slow in his approach, putting pressure on the other batsmen.

In the middle-order, Jonny Bairstow, who had batted brilliantly in the first match, got out cheaply in the last game. The power hitter Abdul Samad also got out for a duck. Vijay Shankar and Jason Holder, who were supposed to be the team’s finishers, have also appeared to be struggling to score runs.

The bowlers did a very good job in the last match as they restricted the opposition to a low score. Rashid Khan picked up two wickets and also scored some quick runs in the end for the team but couldn’t take them over the finishing line. Bhuvneshwar and Natarajan also bowled well, picking up a wicket each. Jason Holder was brilliant with the ball as he picked up three wickets in the last match.

The main drawback for Sunrisers has been their middle-order. They need to make some changes and bring in more experienced players.

The pitch plays slow here as most of the batsmen struggle to score runs. As the match progresses spinners will play a crucial role. Fast bowlers can also pick up wickets by bowling cutters and slower balls. Most of the matches here at this venue this season have been low-scoring games.

Skipper Rohit has been opening the innings for MI for a long time. He scored 43 runs from 32 balls in the last match and will be a great choice for Captain and Vice-Captain in MI vs SRH Dream11 Team.

He is the wicketkeeper-batsman of the team and opens the innings along with Rohit. Quinton scored only two runs in his first match of the season but was brilliant in the last season. Quinton de Kock is very good pick in Dream11 Fantasy team.

He is a right-handed batsman and has appeared to be in very good form this season. Suryakumar Yadav batted brilliantly, scoring 56 runs from 34 balls in the last match.

He is a right-arm fast bowler and well known for his yorkers in the death overs. Bumrah bowled well in the last match but went wicketless but is a quality player who can pick wickets at his will and hence will be a crucial player for Dream11 fantasy team.

He is a left-arm fast bowler and bowls at a good pace and swings the ball very well. Boult bowled very well in the last match, picking up two wickets.

He is a young left-handed batsman and can play aggressively in the middle-order. Ishan Kishan scored only one run in the last match.

He is a right-arm leg-break bowler and is good at picking up wickets. Chahar was exceptionally good with the ball as he picked up four wickets in the last match.

Pollard is a right-handed batsman and can also bowl a few overs of medium pace. In the last match, he scored only five runs and was very expensive with the ball.

He is a left-arm orthodox bowler and can also play big shots in the lower middle-order. Krunal scored 15 runs and bowled well, picking up a wicket.

He is an all-rounder and is equally good with both bat and ball. Hardik scored 15 runs and has not bowled yet in this season.

He is a young left-arm fast bowler and made his IPL debut this season. Marco Jansen bowled decently but went wicketless in the last match.

Skipper Warner is a left-handed batsman and opens the innings for the team. He batted very well, scoring 54 runs in the last match. D Warner is also a good pick for Captain in MI vs SRH Dream11 team prediction.

Manish is a right-handed batsman and has been batting at No.3 for SRH. In the last match, he scored 28 runs from 29 balls.

He is a right-handed batsman and has been batting in the middle-order this season. Bairstow scored only 12 runs.

Williamson is a key player for SRH in the middle-order. Williamson did not play the last match but is expected to play this game.

Rashid is a right-arm leg-break bowler and currently the No.1 spinner in the T20I format in the world. He bowled very well in the last match and picked up two wickets. If you manage credits then Rashid is very good top pick in MI vs SRH Fantasy Cricket team.

He is a bowling all-rounder and can be very handy with the bat down the order. Holder bowled brilliantly in the last match, picking up three wickets.

He is a right-arm medium-fast bowler and is well known for his swing deliveries. Bhuvneshwar bowled decently in the last match and managed to pick up a wicket.

Natarajan is a left-arm medium-fast bowler and bowls yorkers very precisely. He managed to pick up a wicket in the previous match.

He is the wicket-keeper batsman of the team and has been struggling to score runs. Saha scored only one run in the last match.

Samad will play a vital role for the franchise this season in the role of a finisher. He was out for a duck in the last match.

He is a left-arm orthodox bowler. Nadeem bowled decently, picking up a wicket in the last match.

Jadhav is a right-handed batsman and can also bowl a few overs of right-arm off-break. He is yet to play a match this season.

Sandeep is a right-arm medium-fast bowler. He did not play the last match.

This is a risky for small league so it is good to play only Grand Leagues.