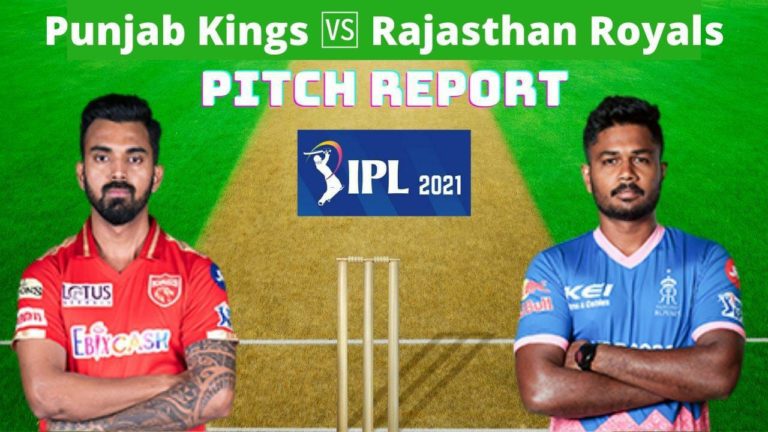 In this article, we will cover PBKS vs RR Pitch Report IPL 2021, Weather Report, Punjab Kings vs Rajasthan Royals Pitch Report, Venues stats, and also top players to watch out for in this clash.

Punjab Kings vs Rajasthan Royals will take on each other in the 32nd match of the IPL 2021 at the Dubai International Stadium, Dubai.

The venue has its own history. The IPL 2020 saw some huge runs at this venue and very little help for the bowlers. The 1st game of the second half which was played between CSK vs MI saw a green track. The fast bowlers performed brilliantly with the new ball in the powerplay. A similar kind of thing can be seen in this game as well.

Venue stats for PBKS vs RR

The pitch at the venue has generally favored the batsmen over the years. 171 was the average first innings score at Dubai during the 2020 IPL season. Though the first game of this season at this venue was a low-scoring encounter the pitch is likely to improve and we could see some high-scoring games at the venue. Chetan Sakariya, Mohammad Shami, and Jaydev Unadkat will play a key role with the new ball and also in the death.

Number of wickets taken by spinners: 95

These numbers make it clear that the fast bowlers are going to be very crucial for both teams. Both the teams have a quality pace attack and it would be a thrilling contest to watch.

Role of toss at the venue

The toss will play an important role in this game. The CSK vs MI clash saw the batting team winning the game after a marvelous comeback with the bat in the second half of the innings. The team will assess the condition on the match day and also consider the due factor. As of now, winning the toss and bowling first would be ideal considering the numbers.

The weather forecast looks very hot and humid with no chance of rain and the dew factor will also not play a very big role in this clash considering the conditions and temperature at the venue. The players will need to be well hydrated to avoid cramps in these hot conditions.

The head-to-head numbers of both these teams are almost equal and there is no one-sided affair in this rivalry.

Top Players to watchout at the Venue

KL Rahul is currently the second-highest run-scorer in the tournament and was excellent at this venue and scored a brilliant century in IPL 2020 against RCB. So far in IPL 2021, Rahul has scored 331 runs from his 7 games with an average of 66.20.

Sakariya has performed brilliantly for the team so far in the first half of IPL 2021 which was played in India. Though he has not played enough games at the venue, he is likely to enjoy the conditions with the new ball. Talking about his numbers, Sakariya has picked 7 wickets from his 7 games and is a player to watch out for.

Livingstone has also not played many games in UAE but has been in tremendous form recently in this format. He is coming back after scoring tons of runs in the recently concluded Hundred league in England and will be looking to make his mark in the Indian Premier League.

The South African all-rounder is another player on our list to watch out for. He contributes both with the ball and bat. Morris was excellent in the first half of IPL 2021 in India. So far in IPL 2021, he has picked up 14 wickets from his 7 games.