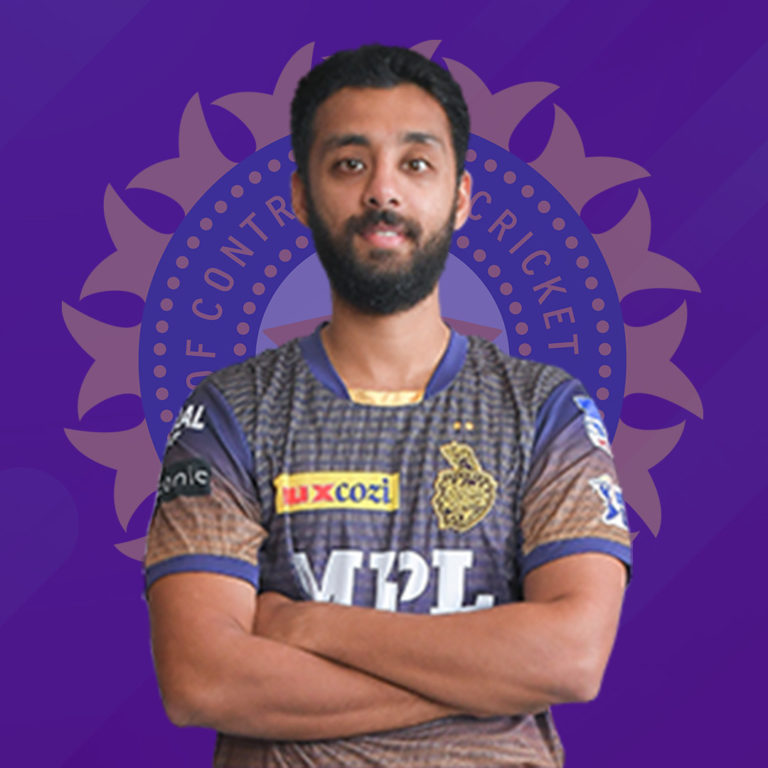 Varun Chakravarthy (29 August 1991) is an Indian Cricketer who plays for India in International Cricket and plays for Kolkata Knight Riders in the IPL.

Varun Chakravarthy is considered one of the top mystery spinners in India as well as in World Cricket. He made his List A Debut for Tamil Nadu on September 20, 2018, against Gujarat in the 2018-19 Vijay Hazare Trophy. Chakravarthy became the leading wicket-taker for his team in the tournament with 22 wickets from his 9 games.

Later, in the same year, Chakravarthy also made his first-class debut for Tamil Nadu on November 12, 2018, against Hyderabad in the 2018-19 Ranji Trophy. Varun has played only one first-class game so far. He came into the limelight after his outstanding performance in the 2018 Tamil Nadu Premier League (TNPL).

His impressive performances in the competition were praised by all and caught the eyeballs of all the scouts and selectors around the country.

Chakravarthy has so far played 9 List A games and has picked up 22 wickets which also includes a five-wicket haul. His T20 numbers are also brilliant as he has picked up 25 wickets from his 21 games.

His impressive performances with the ball and his ability to bowl economically also earned him an IPL contract with Punjab Kings in 2019.

After Chakravarthy’s impressive show in the 2020 IPL season, he was selected in the Indian limited-overs squad for their series against Australia. Unfortunately, he was unable to clear the fitness test and was also said to be injured and was hence ruled out.

In June 2021, he was selected for India’s limited-overs series against Sri Lanka on the basis of his performances in the Indian Premier League. Varun Chakravarthy is likely to make his international debut for the country in the T20 format in this series.

After his brilliance in the 2018 TNPL, Varun Chakravarthy was picked up by the Punjab Kings in the 2019 IPL auction for a whopping price of INR 8.4 crores. He made his IPL debut against Kolkata Knight Riders on March 27, 2019. Chakravarthy was very expensive on his debut and played just one game in the whole season and was also released by the franchise.

In the 2020 IPL auctions, He was again a hot pick for all the franchises. Chakravarthy was picked up by the Kolkata Knight Riders for the whopping price of INR 4 crores. This time around he played all the games for the franchise and impressed everyone with his bowling performances. He also picked up a five-wicket haul against Delhi Capitals in a league stage game and ended his spell with the figures of 5/20 in his 4 overs. Chakravarthy was also retained in the 2021 IPL season and continued his good form for the team.

Varun has totally played 21 IPL games so far and has picked up 25 wickets. His ability with the ball makes him a crucial asset for the franchise as well as for the national team in the coming years.