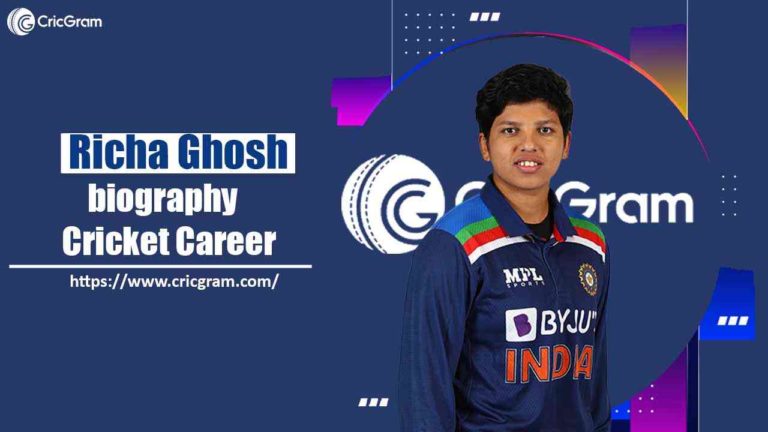 Richa Ghosh, who belongs to West Bengal, is an International Women’s Cricket Player, who has debuted in international cricket at the age of 16, and she is a wicketkeeper-batsman.

The most important thing about Richa is that she has no ducks in her entire international and domestic cricket career so far, and that makes them Separate from the rest of the other Indian women’s international Cricket players.

Richa Ghosh biography: International Indian women player Richa Ghosh has been born on 28 September 2003 in Siliguri City of Bengal State of India. She is mainly known to play ICC Tournament, Bengal Domestic Cricket, and Bengal Women’s Under-19 cricket. She started her cricket career at the age of 12 and after that, she has made her place in Bengal Domestic Cricket and Under 19 at the age of 14.

Richa Ghosh came into the discussion when her name was listed in the ICC Women’s T20 World Cup 2020, and she got an opportunity to play in the World Cup as a wicketkeeper-batsman.

If we talk about Richa’s initiation education, then they have completed their schooling from “Margaret Sister Nivedita English School, Siliguri”, and at the moment she is fulfilling her graduation studies from Siliguri.

Richa’s father’s name is ‘Manabendra Ghosh‘ which has been the Batsman and Empire of Bengal’s club level. And besides, Richa’s mother’s name is Swapna Ghosh, which is a housewife, and Elder Sister’s name is Shomasree Ghosh. And at the moment, the entire family of Richa lives in the Siliguri city of Bengal.

Richa Ghosh had made a debut in the under-19 Bengal Women’s Team at the age of 11 in 2015 and she has been a part of Bengal’s Women’s Under-19 team for several years.

In 2018, Richa has debuted in Domestic Cricket in Bengal, and due to her good performance in her domestic cricket, the ICC had selected her name in ‘ICC Women T20 World Cup 2020’ which was played in New Zealand. And she also performed well in that World Cup.

Richa has done her debut in ODI International Cricket against the Australian Women’s team on September 21, 2021.

Richa Ghosh has debuted in T20 ICC International Cricket on 12 February 2020 at the age of 16, and she has played her first match against the Australian Women’s team.