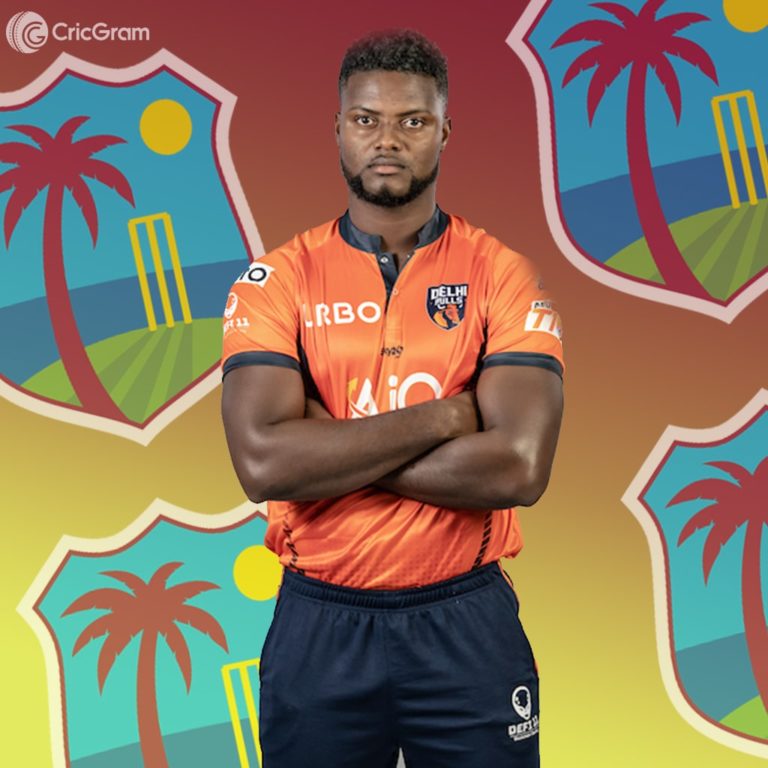 He has played for Guyana in country club cricket since 2016, while he has represented the Guyana Amazon Warriors in the franchise cricket Caribbean Premier League(CPL) since the CPL Season 2022.

And he started playing cricket professionally at the age of 20, and then in Nov 2019, he was included in the West Indies international team for the ODI squad against Afghanistan series.

Romario is known for playing as a cricket bowling allrounder cricket player in his team, And his bowling style is a Right-arm fast-medium, While his batting style is Right-hand bat and is especially known to bowl & bat in the middle overs of the match.

Romario has been playing domestic cricket for the Guyana team since Jan 2016, and he was selected for the West Indies international team in Nov 2019 for ODI. So let’s see about Romario Shepherd‘s domestic & international cricket debut and career.

He made his List A debut on 15 January 2016 while playing against Leeward at Basseterre. After that, He made his first-class debut on 13 March 2017, while playing against Jamaica at Kingston. And Romario has got a chance to play 25 FC cricket matches so far, in which he has taken 74 wickets by giving runs at an economy of 3.09. And also scored 793 runs with the help of 1 century and 4 half-centuries.

And then made his domestic T20s debut on 05 September 2018 in the match of Trinbago vs Amazon at Port of Spain.

For the first time, Romario was selected for the West Indies international team in Nov 2019 for the ODI squad against Afghanistan. And he made his ODI debut on 06 November 2019 in the series match of Afghanistan vs West Indies at Lucknow. he has got a chance to play only 17 ODI matches till now, in which he has taken 10 wickets by giving runs at an economy of 5.20, And also scored 199 runs with the help of one half-century.

And then, In January 2020, Romario was selected in the T20I squad against the series of West Indies vs Ireland at Basseterre, and he made his T20I debut on 21 January 2020 while playing against Ireland at Basseterre. And he has got a chance to play only 20 T20i matches so far, in which he has taken 20 wickets by giving runs at an economy of 10.60, And also scored 149 runs with the Strike rate of 150.50.

Romario was selected in the CPL for the first time in the Guyana Amazon Warriors for the 2020 Caribbean Premier League season. After that,  In Dec 2021, he was included in the Karachi Kings team for the 2022 Pakistan Super League.

In February 2022, he started his IPL career And was bought by the Sunrisers Hyderabad in the mega auction of the 2022 Indian Premier League tournament.