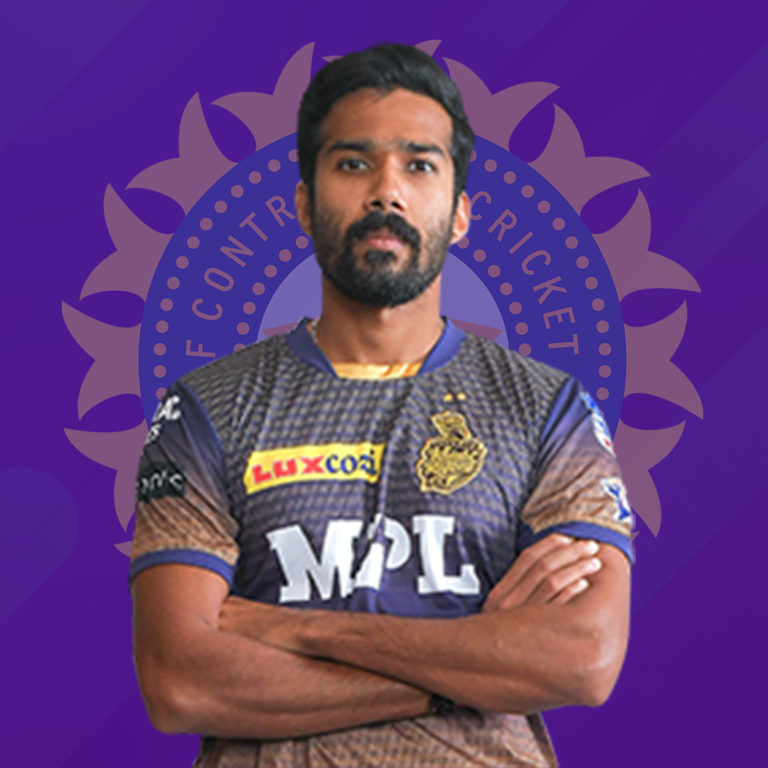 Sandeep Warrier (4 April 1991) is an Indian Cricketer who plays for Tamil Nadu in Domestic Cricket and plays for Kolkata Knight Riders in the IPL.

Sandeep Warrier is regarded as one of the best bowlers in the domestic circuit. The right-arm quick made his first-class debut against Goa way back on 24th November 2012. He picked up 2 wickets on his debut and had a decent outing. Sandeep has played 57 first-class games as of 2021 and has picked up 186 wickets. In the 2018-19 Ranji Season, he picked up 44 wickets in the tournament which helped Kerala to reach the semi-finals for the first time in the history of the Ranji Trophy.

Talking about Warrier’s List A Career, He made his List-A debut for Kerala against Hyderabad on 24 February 2013. It proved to be his dream debut as he picked up 3 wickets in his 10 overs and ended his spell with the figures of 30/3 and played a crucial part in Kerala’s Victory. He has played 55 List A games so far and has picked up 66 wickets.

In 2018, he was suspended for three games in the 2018 Vijay Hazare Trophy due to some disagreement with his Kerala skipper Sachin Baby. Warrier along with other players also wrote a letter to the Kerala Cricket Association (KCA) saying that they were unhappy with their skipper’s leadership.

Talking about his T20 Career, Sandeep has picked up 51 wickets from his 53 matches with his best figures being 3/19. He also has a hat-trick to his name which he picked up in the 2019 Syed Mushtaq Ali Trophy.

In June 2020, Warrier decided to move to Tamil Nadu and play domestic cricket for them.

Sandeep Warrier was picked up by the Royal Challengers Bangalore in 2013 after his impressive show on the domestic circuit. He remained with the team till 2015 and was later released by the franchise. Though he did not get to play any match for the team but was a great learning experience for him being around players like Zaheer Khan and Praveen Kumar.

In 2019, he again got the opportunity in the IPL as he was picked up by the Kolkata Knight Riders as a replacement for Kamlesh Nagarkoti who was injured. He finally made his IPL debut against Mumbai Indians on 28th April 2019 at Eden Gardens. He has totally played 4 IPL games and has picked up 2 wickets so far.

He has been retained by the franchise in the 2021 IPL season as well. Warrier is yet to prove his mark at the big stage but his ability and talent with the ball are well-known for all.