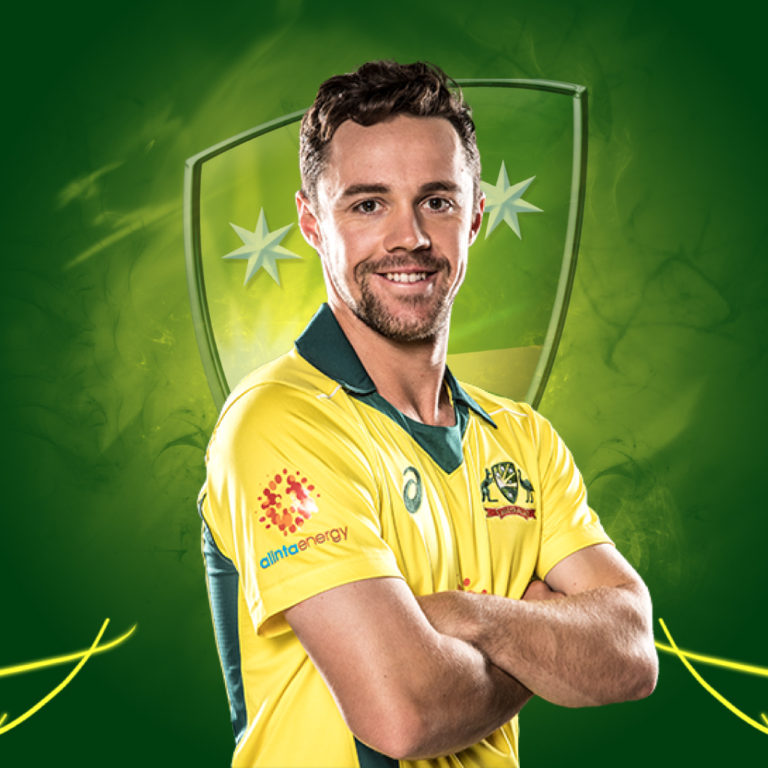 Travis Head (born 29 December 1993) is an Australian Cricketer who plays for Australia in International cricket and Adelaide Strikers in the BBL.

Head started his domestic career by representing his South Australia team at both under-17 and under-19 levels.

He then even made his first-class debut for South Australia in the Sheffield Shield at 18 in 2012.  Head scored his maiden half-century in his second match and fell short of scoring his maiden century in his third game by scoring 90 runs against Tasmania.

Travis Head was also rewarded with a rookie contract with South Australia at the end of the season.

After his consistent performances in the domestic circuit Head went on to play 18 under-19 One Day International (ODI) matches for the Australian U-19 team.

In the 2012 Under-19 Cricket World Cup. He was impressive both with the bat and ball during the tournament. He showed great leadership qualities when he captained South Australia to victory in the 2012–13 National Under-19 Championships and was also named the Player of the Championship for the second consecutive year.

Shortly after South Australia’s Shield victory against Victoria in January 2013, Head was hit by a car outside a hotel in Adelaide, receiving injuries to his head and back. Still, he then made a full recovery and returned for South Australia’s next match.

Head was also one of those six young Australian players. They were to be part of the inaugural Ageas Bowl International Cricket Academy during the 2013 season, training at the ground’s facilities.

In his early career, he struggled to reach his maiden first-class century but finished with the scores in the nineties on multiple occasions.

After his score of 90 in his debut season and his unbeaten 95 against Western Australia in 2012, Head made it to the nineties three times in the 2013–14 Sheffield Shield season. After this, he scored his maiden List A century for the National Performance Squad against South Africa A in July 2014.

Travis Head made his international debut in the year 2016. Head played his first T20I game against India at Adelaide in January 2016. He scored just two runs in the match.

Later, on June 13, he played his first ODI match against the Windies but was not impressed with the bat. His Maiden half-century came against South Africa, which was his ninth match, he played a good knock of 51 runs in that match.

On October 7, 2018, Head made his debut in the longest format against Pakistan and Aaron Finch and Marnus Labuschagne. Head was dismissed cheaply in the first innings but scored 72 runs off 175 balls in the second innings, which was appreciated by all.

Head is currently a regular member of the Australian test side and plays in the middle order for the team.

In the 2015 IPL auction, Head was picked by Delhi Capitals for Rs 30 lakhs, however, he didn’t get to play any matches for the team in that season.

Later, in the 2016 IPL auction, Royal Challengers Bangalore bought him for Rs 50 lakhs. He then made his IPL debut on April 20, 2016 against Mumbai Indians.

The next year, In 2017, he played for the same team, RCB, and played eight games in that season. Head also scored his maiden IPL fifty against Kolkata Knight Riders. He played a solid knock of 75 runs in that match.