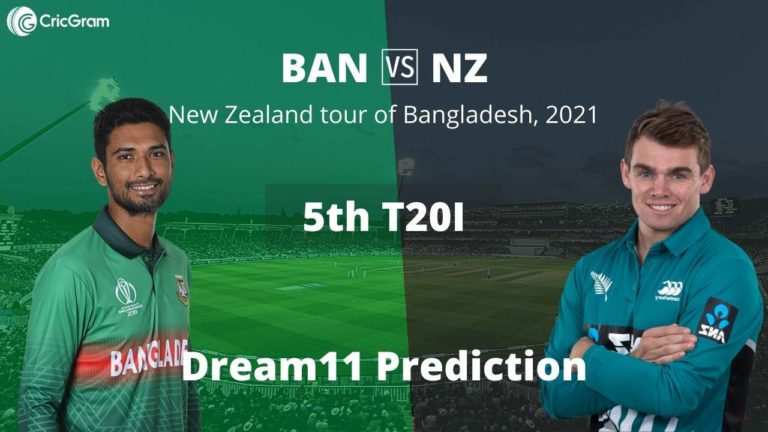 Bangladesh vs New Zealand will be playing in the 5th T20I at the Shere Bangla National Stadium, Dhaka.

They have sealed the series after a dominating performance in the 4th T20I. Except for the third game, they have been excellent both with the bat and ball.

Bowling first in the last game, Mustafizer Rahman and Nasum Ahmed completely rattled the Kiwis and bundled them out for just 93. Fizz and Ahmed picked up 4 wickets each and ended with the figures of 4/12 and 4/10 on their four-over spell.

With the bat, they struggled to get going despite chasing a low total. Skipper Mahmudullah played a match-winning knock of 43 runs off 48 balls. Naim also assisted him very well and played a fine knock of 29 runs.

They have already sealed the series. They could think of giving chances to other players who are yet to play a game.

After a comeback in the third game, they slipped in this one. Opting to bat first, They lost quick wickets and were never able to settle throughout the innings.

Will Young was the pick from the batters and played a mature knock of 46 runs. Apart from him, no other player was able to score big and were bundled out for just 93.

With the ball, Ajaz Patel has been brilliant all throughout the series and is also the highest wicket-taker. He gave away just 9 runs in the last game and picked up 2 wickets.

His partner Cole McConchie also picked up a wicket but was on an expensive side with the ball. All other bowlers went wicketless. They have nothing to lose in the last game and will hope to end the series on a high and win the last game.

The pitch will be again very slow and sluggish. Spinners and fast bowlers will be key on the track as usual. Even run a ball score is difficult to score. Winning the toss and batting has been the trend.

(The H2H record is based on the last 2 years)

He has been outstanding with the ball in the series so far. Rahman bowled brilliantly in the last game and picked up 4 wickets and is also one of the highest wicket taker with 8 wickets under his name and is a excellent choice for C and VC in BAN vs NZ Dream11 Team.

He is right-arm off spinner and will bowl his 4 overs in the middle overs. Hasan bowled decently in the last game and picked up a wicket.

He is the skipper of the team and has been performing very well for the team. Mahmudullah played a match winning knock of 43 runs in the last game.

He is a very talented all-rounder from the team. Sarkar is likely to feature in this game and will play at No 3 and can also bowl a over or two with the ball.

He is one of the most experienced and talented players on the team. Rahim will bat in the middle order. He was dismissed for a duck in the last game.

He will open the innings for the team and also bowl 4 overs with the ball. Ravindra was dismissed for a duck in the last but was very economical with the ball and is a good option for C and VC in BAN vs NZ Dream11 Prediction.

He is a left-arm off-spinner who will bowl in the middle overs. Patel is the highest wicket-taker in the series. He bowled perfectly in the last game and picked up 2 wickets.

He is the skipper of the team and will bat in the top order. Latham is the highest run scorer of the series with 109 runs under his name. He played a decent knock of 21 runs in the last game.

He is a right-arm off-spinner. McConchie is bowling very well in the series for his team. He picked up one wicket in the last game but was expensive.

He will open the innings for the team. Allen is getting decent starts but is throwing away his wicket. He scored 12 runs in the last game.

He is a right-arm off spinner who will bowl in the middle overs. Aminul Islam is likely to play in this game and can be a trump card pick in Bangladesh vs New Zealand 5th T20I.

Final team will be updated on Telegram after announced the playing XI.