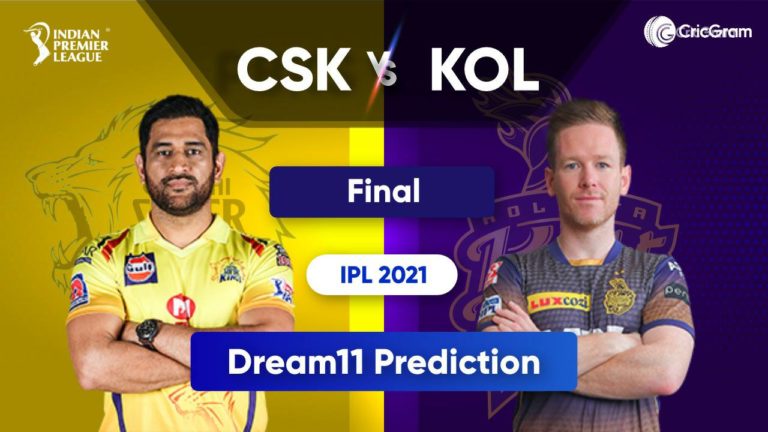 Chennai Super Kings finished at the 2nd position on the IPL 2021 points table, defeated DC in the Qualifier 1 and were the first team to qualify for the Final.

Gaikwad is back in form as he scored 70 runs in the last match, but du Plessis got out early. At No.3, Robin Uthappa turned the game for CSK by scoring 63 runs. In the middle, Rayudu and Moeen Ali haven’t played a big inning recently. Dhoni batted brilliantly and finished the match for the team.

The bowlers made a decent comeback in the last match, but they still need to improve a bit. The consistent wicket-taker, Shardul, went wicketless, but Josh Hazlewood got two wickets. Jadeja, Moeen Ali, and DJ Bravo managed to pick up a wicket.

CSK would be hoping to win the Final as this would be the last season for few players.

The openers, Shubman Gill and Venkatesh Iyer are in great form in the recent matches and scored 46 and 55 runs. At No.3, Nitish Rana is failing consistently, but Tripathi looked back in shape and scored winning runs. The skipper Eoin Morgan has one of the poorest seasons this time. Dinesh Karthik has done a decent job as a finisher.

The bowling unit has taken the team to Finals in IPL 2021. Varun Chakravarthy and Lockie Ferguson have been the major contributors this season. The remaining bowlers, Shivam Mavi and Narine, have also performed well in crucial moments.

Kolkata is in great form and has a great chance of winning the title for the third time.

The temperature will be high, and the weather will be perfect for the Final match of IPL 2021.

The pitch was slower earlier, but the batters have enjoyed batting here from the last couple of matches. The dew factor will play a significant role in the Final. Teams should try to score around 190 runs to be on the safer side.

Ruturaj is back in form and played a brilliant inning, scoring 70 runs from 50 balls in the last match.

Faf has performed well but has failed to maintain consistency and was out for just a run in the last match.

Moeen Ali hasn’t performed much in UAE but played well in the last game, picking up a wicket and scored 16 runs. Moeen Ali is very good Captaincy choice in CSK vs KOL Dream11 Team.

Shardul is the team’s most consistent performer but was expensive and went wicketless in the last match.

Jadeja has delivered with both bat and ball this season. He managed to get a wicket in the last match.

Bravo has bowled mainly in the death overs this season. He picked up a wicket but was expensive in the last match.

Hazlewood is a tall right-arm fast bowler and has picked up some crucial wickets this season. He got two wickets for 29 runs in the last match.

Russell performed well for the team this season but unfortunately got injured and hasn’t played since then. If plays, Andre Russell is also a very good Captain choice in CSK vs KKR Dream11 Team.

Venkatesh Iyer is back in form as he scored 56 runs but did not get the chance to bowl.

Gill is performing consistently well and scored 46 runs from 46 balls in the last match.

Sunil Narine has picked up wickets at crucial moments this season and scored some quick runs but went wicketless in the last match.

Varun has performed brilliantly throughout the season and picked up two wickets in the last match for just 26 runs.

Ferguson has been the best pacer for KOL in IPL 2021. He managed to get a wicket in the last match.

Tripathi can bat at different positions and score runs. He scored 12* runs in the last match and won the game for KKR.

Tripathi has been in brilliant form this season. He hit the winning six in the last match and will be high in confidence.

He failed in the first two games but was brilliant in the last game and delivered a match winning knock of 63 runs.