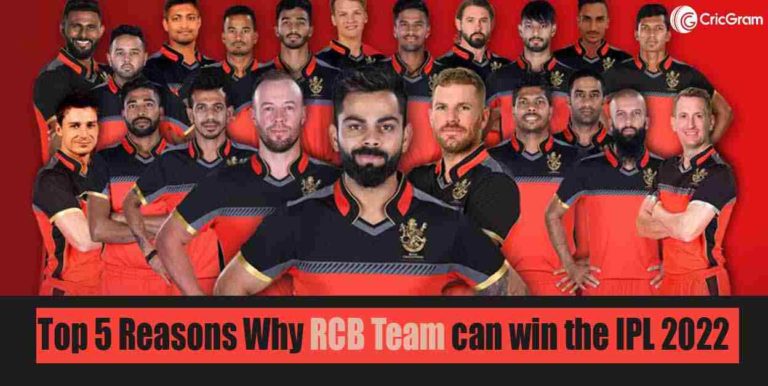 Top 5 Reasons why RCB can win the IPL: Royal Challengers Bangalore is one of the most entertaining teams in IPL history. They have reached the IPL finals thrice in 2009, 2011, and 2016. They had some explosive players like “Chris Gayle, AB de Villers, KL Rahul, Shane Watson” who was known for their explosive hitting, But In-spite of this, RCB’s team is not won any IPL title in its history.

Faf du Plessis (RCB New captain) has been appointed the captain of the RCB franchise in the 2022 edition of IPL after Virat Kohli decided to step down from captaincy last year. RCB will begin their tournament on 27th March against Punjab Kings. And they have been placed in group B IPL Teams including Chennai Super Kings, Sunrisers Hyderabad, Gujarat Titans, and Punjab Kings.

RCB will play with these four teams twice And then play with the other Group A teams once. It will be a big challenge for RCB to perform well as a unit. Under the captaincy of Kohli, RCB performed well And reached the playoffs stage in the 2020 and 2021 editions.

Top 5 Reasons why RCB can win the IPL [Easiest Guide]

Here we will discuss the top 5 reasons why RCB Team can win the IPL 2022. And apart from that, You can check the full IPL 2022 Schedule here.

Virat Kohli will be looking to replicate the form that he displayed in the 2016 edition where he scored record-breaking 973 runs and helped RCB reach the finals. From the Last few ipl seasons, Virat Kohli has been struggling for form with the captaincy burden.

Without the captaincy burden, Kohli will be looking to show his mettle and make life tough for the opposition bowlers. He is currently the leading run-getter in IPL history with 6283 runs from 207 matches including 5 centuries.

During the 2021 edition of IPL, Kohli performed well with 405 runs from 15 matches with 3 half-centuries. And Despite his inconsistent form, Royal Challengers Bangalore reached the playoff of the IPL season 14.

If he can replicate his amazing form during this year’s IPL edition, Royal Challengers Bangalore has a chance to win their maiden IPL title. He will be a key member for RCB to create a major impact with bat and help Faf du Plessis with decision-making skills.

Glenn Maxwell had a dream season for Royal Challengers Bangalore in the 2021 edition. He scored 513 runs from 15 matches with the best score of 78 runs. His performances helped RCB reach the playoff.
He would be looking to replicate his explosive form this year too, And as you all know that AB de Villers decided to retire from IPL also. But West Indies player Sherfane Rutherford will be part of RCB Teams, who will play a key role for RCB in the death overs for making high-scoring runs and helping RCB win matches.

Royal Challengers Bangalore has a decent bowling attack including Josh Hazlewood, Jason Behrendroff, Hasaranga who can change the match with their bowling.

Hazlewood and Behrendroff can create an impact on the batting team with their swing bowling while Hasaranga who has done well for Sri Lanka in the shortest format can help RCB take wickets in the middle overs.

Harshal Patel will also play a key role in this year’s IPL. He was exceptional for Royal Challengers Bangalore with 32 wickets helping RCB reach the playoff. His performance stood out with the ability to bowl slower deliveries and deceiving the batter did the job for RCB.

David Willey is another decent bowler from England who can swing the ball and pick early wickets. And Siddarth Kaul who played for SRH will be bolstering Royal Challengers Bangalore attack with his yorkers at the end. He has the experience of playing for Punjab in the domestic season and will be looking to showcase his mettle against top-quality batting.

Harshal Patel did well for Team India after making a debut against NZ at home. He was released by RCB before the auction and bought him again for a whopping price in the auction.

They would be able to restrict opposition while batting first And also defend the target on good batting pitches.

Royal Challengers Bangalore bowling has been a big problem for quite some time and would be looking to rectify their problems in season 15.
Shahbaz Ahmed is also a decent left-arm spinner will be looking to impress once again and show more responsibility along with other bowlers if given a chance in the playing XI.

3.Faf du Plessis as a captain

Royal Challengers Bangalore has appointed South African legend as the captain of Royal Challenger Bangalore in this year’s edition of IPL after Virat Kohli decided to step down from his captaincy.

Du Plessis has been the backbone of the Chennai Super Kings franchise. He has done well for the South African Cricket Team as captain. It is going to be a challenge for Faf du Plessis to lead such an IPL franchise.
Virat Kohli did well for Royal Challengers Bangalore as a captain reaching the finals in 2016. Under his captaincy, RCB qualified for the playoff in 2020 and 2021. Faf du Plessis can do well as a captain and would be eager to help the franchise win its maiden IPL title since its inception in 2008.

Du Plessis performed well for Chennai Super Kings in the 2021 edition. He scored 633 runs while opening the innings from 16 matches with 6 half-centuries. His performances helped Chennai Super Kings win the title.
The South African legend will play the entire IPL because he retired from international cricket. His role as a captain would be important to help RCB win their first-ever title.

Royal Challengers Bangalore have bought a few young Indian players who can create a major impact with the bat or ball. Mahipal Lomror, who did well for Rajasthan Royals with his explosive batting, And due to his explosive batting performances, RCB has bought Mahipal for 95 Lakhs.

They have bought Anuj Rawat who was not given enough chances with Rajasthan Royals. Suyash Prabhudessai, Aneeshwar Gautam are youngsters who be looking to make a mark against top-quality bowling.

AkashDeep who did a good job for Bengal in the domestic season would be eager to do well in bowling. Chama Milind impressed with his bowling skills for Hyderabad will be showing his mettle and making sure RCB wins their maiden IPL title.

Shahbaz Ahmed who was a part of the team last year would be replicate the form that he displayed for Bengal. It looks like a strong unit, and one would be hoping to see Royal Challengers Bangalore lift their maiden IPL title with impressive performances from their youngsters and experienced players.

Lomror did a superb job for Rajasthan Royals in the 2021 edition of IPL. He played with intent and scored at a quick pace to help RR post decent totals. It is going to be a challenge for all these young players to perform against the best quality bowlers and never disappoint with their respective abilities.

Note: The 360-degree player, AB de Villers will be a mentor for Royal Challengers Bangalore franchise in this year’s IPL. He will be looking to guide the players and make sure that they remain focused on the job to win their first-ever prestigious title.

5.AB de Villiers as a mentor

Royal Challengers Bangalore will be bolstered with AB de Villiers being named as the mentor for this season. Under the captaincy of Virat Kohli, the franchise reached the playoffs, but unfortunately, they are not able to win the title.

AB de Villiers has been the backbone of the Royal Challengers Bangalore line-up along with Virat Kohli. His ability to hit innovative shots against the best bowlers made him a dangerous batter in the Indian Premier League history. but unfortunately, they will be not part of the RCB team as player, Because they announced their retirement from all forms of cricket including ipl.

AB de Villiers will help players in the franchise to perform well as a unit and help Indian youngsters to showcase their skills against the best bowlers across 9 franchises.

It is going to be a challenge for de Villiers to perform as a mentor after featuring for RCB for a long time. AB de Villiers has done wonders as a batsman in IPL history and would be hoping to perform well as a mentor in this year’s IPL.