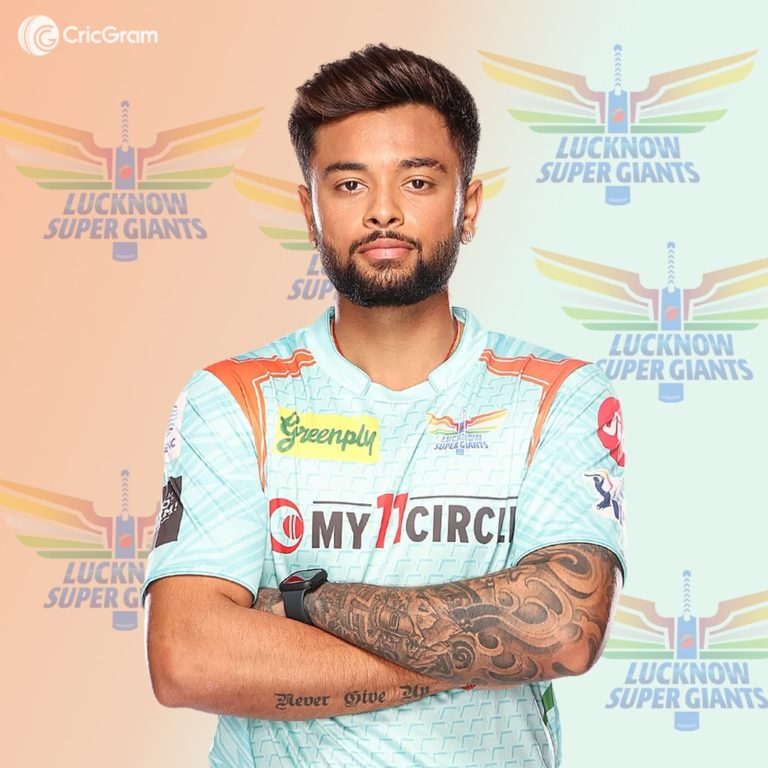 Karan Sharma is an Indian all-rounder cricket player, and he plays for the Uttar Pradesh team in domestic cricket since the year 2021 and is part of the Lucknow Super Giants team in the Indian Premier League since 2022.

Karan Sharma Biography: India’s rising all-rounder cricket player Karan Sharma was born on 31 October 1998 in Delhi, India, his full name is Karan Sunny Sharma, and he has been mainly known for playing domestic cricket for the Uttar Pradesh team, and IPL franchise cricket.

On the other hand, if we talk about Karan’s family, then not much information about his family has been shared on the internet or social media platforms yet.

Karan plays in his team as an all-rounder cricket player, and his batting style is Right-hand Bat, while his bowling style is Right-arm Offbreak. And he is primarily known for batting and bowling in the middle order of matches.

He made his debut in first-class cricket on 17 February 2022 against the Vidarbha team, and he has got a chance to play only 3 first-class cricket matches so far, in which he has scored 204 runs with the help of one century and also took 6 wickets by giving runs at an economy of 2.96.

At the same time, he made his debut in List A cricket on 3 March 2022 while playing against the Maharashtra domestic team. And he has got a chance to play 15 List cricket matches so far, in which he has scored 369 runs with the help of one half-century, and with that, he also took 3 wickets by giving runs at an economy of 4.71.

He made his debut in T20 cricket on 10 January 2021 against the Punjab domestic team and has got a chance to play 11 T20 cricket matches so far, in which he has scored 305 runs with the help of 4 half-centuries, And apart from this, he has also taken two wickets by giving runs at an economy of 5.50.

Karan has been included in the Lucknow Supergiants team by paying his base price of 20 lakhs in the IPL mega Auction 2022.

He made his debut in the Indian Premier League on 10 May 2022, playing against the Gujarat Titans team, in which he scored 4 runs in 4 balls and was dismissed by Yash Dayal.

Karan is born in Delhi and is a native of Delhi but plays Cricket for the Uttar Pradesh domestic team.