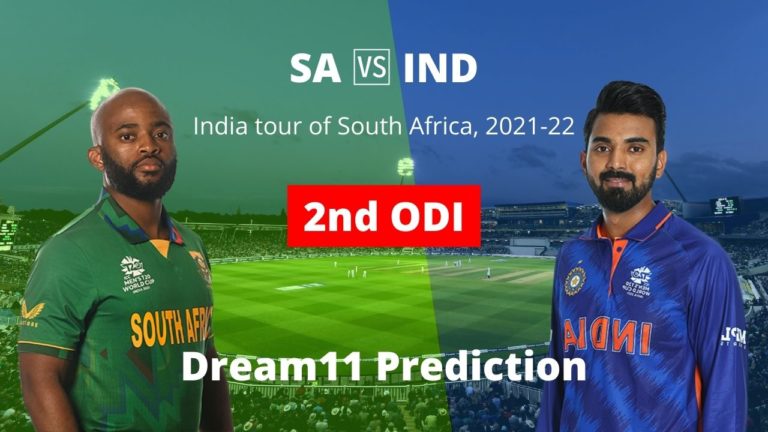 SA vs IND Dream11 Prediction, Probable Playing 11, and Fantasy Cricket Tips. South Africa and India will play in the 2nd ODI of the India tour of South Africa 2021-22 at the Boland Park, Paarl.

After conquering the Test series, South Africa has made an excellent start to the ODI series by winning the 1st ODI comfortably 31 runs.

Quinton de Kock opened the innings and batted decently, but Janneman Malan got out early. Markram couldn’t contribute much in the middle-order, but skipper Bavuma and van der Dussen batted brilliantly, scoring a century each, and helped the team post a big total.

The bowlers struggled in the initial part of the game but bowled brilliantly in the middle overs. Andile Phehlukwayo, Tabraiz Shamsi, and Lungi Ngidi picked up two wickets each. The spinners, Maharaj and Markram, picked up one wicket.

South Africa would be eager to win the next match and seal the ODI series.

India is having a tough time as they have lost the Test series and lost the first match of the ODI series by 30 runs.

Skipper Rahul opened the innings and struggled to score runs, but Shikhar Dhawan and Virat Kohli batted well and scored in the fifties. In the middle-order, the players like Shreyas Iyer, Rishab Pant, and Venkatesh Iyer failed to score runs, and as a result, India lost the last match.

The Indian bowlers started the innings well but struggled to pick up wickets later. Burmah picked up two wickets, and Ashwin got one wicket. The remaining bowlers went wicketless.

India might have lost the last match, but they would be eager to get on the field and win their first Test series in South Africa.

The pitch at Boland Park is good for batting. We can expect 1st innings score 275 runs.

SA vs IND Head to Head

Quinton is one of the top ten batsmen in the ODI format and opens the innings for the team. He scored 27 runs in the last game. Q de Kock is very good Captain choice in SA vs IND Dream11 Team.

Malan is a right-handed batsman who opens the innings and de Kock and scored only six runs in the last match.

He is a right-hand batsman and right-arm off-break bowler. He took a wicket in the previous match.

Rassie bats in the middle-order, scored 129* runs from 96 balls, and was awarded Player of the Match.

Skipper Bavuma batted sensibly at No.3 in the last game and scored 110 runs from 143 balls.

Shamsi is a left-arm chinaman bowler and picked up two wickets in the previous match.

L Ngidi was expensive in the last match but managed to pick up two wickets.

Phehlukwayo is a bowling all-rounder and bowled well in the last game, picking up two wickets for 26 runs.

Virat Kohli is currently the No.2 batsman in the ODI format and scored 51 runs in the previous match.

KL Rahul is in good form and opened the innings in the last game but scored only 12 runs.

Dhawan has consistently performed well and scored 79 runs in the last game.

Bumrah bowled well in the last game and picked up two wickets for 48 runs.

Shardul Thakur was expensive in the last game but batted well, scoring fifty from 43 balls.

Pant did not perform well in the last match as he scored only 16 runs from 22 balls.

He didn’t any wicket in the last game but Bhuvneshawar Kumar is very good bowler.

Ashwin has made a comeback into the ODI format and performed well in the last game by picking up a wicket.