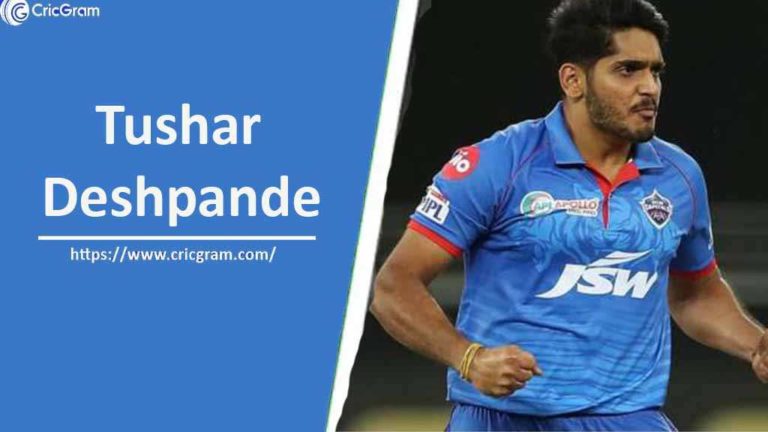 Tushar Deshpande is an Indian cricket player who is known to play in India’s Domestic Cricket and IPL T20 League, he belongs to the city of Mumbai and from there he has completed his cricket studies. And he came into the discussion between cricket lovers when he was selected in Delhi Capital for the first time in the IPL Auction in 2020.

Tushar Deshpande wants to be a batsman since childhood and he has practiced batting more than bowling in the cricket Academy but he became an Indian Medium Fast accidentally.

Tushar Deshpande Biography: Indian cricket player Tushar Deshpande, who has been debuting in the Indian Premier League (IPL) with the Delhi Capitals team, was born on May 15, 1995, in the Kalyan of Mumbai, India, He is mainly known to play IPL, First Class Cricket, Domestic Cricket, and List A Cricket. And he came into the discussion when he was included in the Delhi team in the 2020 IPL Auction.

The name of Tushar’s father is Uday Deshpande, who do business from the profession, his mother’s name is Vandana Deshpande, who has died due to cancer disease in 2019, And at the time his mother died, he was playing Syed Mushtaq Ali Trophy, and he got information about it during the match.

Tushar’s mother Vandana Deshpande also wanted her son to play cricket for the country, And together, his father also supported Tusshar to play cricket.

Tushar was very interested in playing cricket since childhood. He started playing cricket only while studying at school. His father Uday Deshpande also supported them. Uday had allowed the son to go to the club to learn the nuances of cricket. And thus Tusshar has started his cricket career.

Tusshar has started first-class cricket in 2016 with her state team, and he has done First Class Cricket Debut on October 6, 2016, with the Ranji Trophy. And since then he played Domestic Cricket for the Mumbai team.

After that, he has done a debut in List A cricket, with Vijay Hazare Trophy in 2018, and he got a chance to play List-A cricket on September 19, 2018.