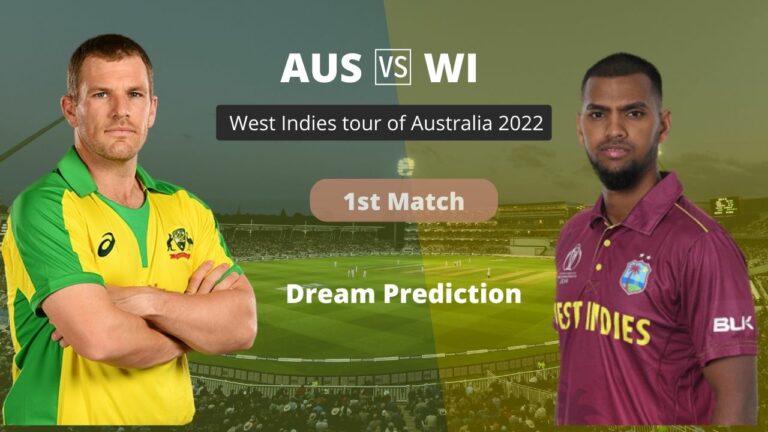 Australia vs West Indies will play in the 1st match of the two-match T20I series at the Carrara Oval, Queensland.

Australia is coming into this series after losing their last series against India by 2-1. They have announced a full-strength squad for this series with the return of David Warner, Mitch Marsh, and Mitch Starc.

With the bat, David Warner, Aaron Finch, and Mitch Marsh will do the bulk of scoring for them at the top. Whereas, Glenn Maxwell and Matthew Wade will do the finishing duties for them.

With the ball, Mitch Starc, Josh Hazlewood, and Pat Cummins will be their key pacers. Glenn Maxwell and Adam Zampa will handle the spin department.

West Indies are currently in a transition phase and have won only 1 game out of their 5 games and will look to gain some confidence by winning this series.

With the ball, Obed McCoy and any one of Sheldon Cottrell or Alzari Joseph will be their main pacers in this series. Whereas, Akeal Hosein and Yannic Cariah are expected to handle the spin department.

The pitch is expected to be a very good wicket to bat on. Even though the average score is below 130 we can expect a big total if Australia bats first.

There is no chance of rain at the venue and we are expected to witness a full game of cricket.

You can also catch the live commentary, scorecard, and latest updates of the 1st Match between AUS vs WI.

AUS vs WI Head to Head in T20I

He will bat in the middle-order and can also bowl few overs with the ball. Maxwell was average in the last series but is still a very good differential C and VC choice in AUS vs WI Dream11 Team.

He is a very talented all-rounder. Marsh will be playing T20I cricket after some rest and will look to freely.

Warner needs no introduction and will open the innings along with Finch. He too is coming into this series after resting in the last series.

He is the skipper of the team and will open the innings. Finch batted very well in the last series and gave good starts for the team.

He will be their key pacer along with Cummins and will bowl in powerplay and death. Hazlewood bowled decently in the last series.

He will lead the pace attack and can also score some handy runs lower down the order. Cummins was average in the last series but is a quality player.

Starc will be their main pacer and will bowl the crucial overs. He is also playing this format after a long gap.

He will be thier key spinner and will bowl in the middle overs. Zampa can be a very good trump card pick in this game.

He will be their key player with both bat and ball. Holder will also bowl 1-2 overs in the death and is a must-have pick. He is a very good C and VC choice in AUS vs WI Dream11 Prediction.

He is the skipper of the team and will bat in the middle-order. Pooran is a hit or miss type of player and can score anytime.

He will open the innings and is a hard hitter. Lewis has always performed consistently in this format.

Mayers will open the innings and can also bowl few overs if needed. He was in excellent form in the last series.