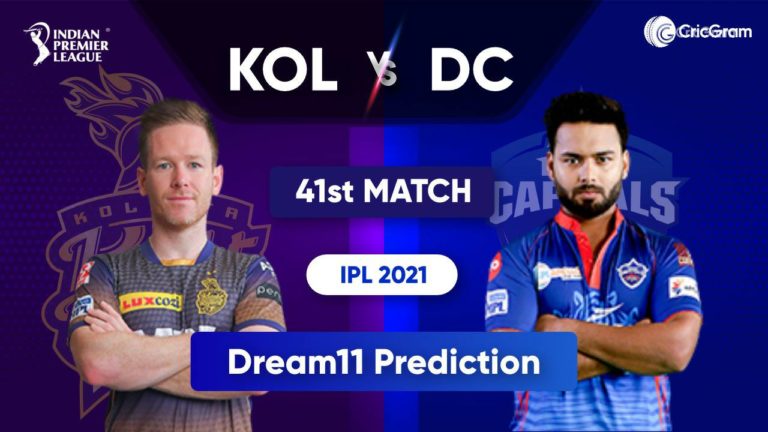 Kolkata Knight Riders and Delhi Capitals will play against each other in the 41st match of IPL 2021 at Sharjah Cricket Stadium, Sharjah. We will cover KOL vs DC Dream11 Prediction, Probable Playing 11, and Fantasy Cricket Tips of IPL 2021.

Kolkata Knight Riders lose a match after two consecutive wins and are currently at the 4th position on the points table. They lost a thrilling game by just two wickets.

Shubhman Gill has been scoring runs quickly but has not been able to play a big inning, but his partner played brilliantly in a couple of matches. Tripathi has been consistent at No.3 but was unlucky to fall short of just five runs to his fifty, and in the middle-order, Eoin Morgan has been entirely out of form.

Nitish Rana and Dinesh Karthik finished the innings brilliantly in the last match. The bowlers have been the major strength of the team. Finally, Sunil Narine bowled well and picked up three wickets in the previous game. The remaining bowlers picked up one wicket each.

Kolkata needs to put the defeat behind and should focus on winning the coming matches.

Delhi Capitals have been one of the strongest teams this season as they have lost only two matches and are currently at the 2nd position on the IPL 2021 points table.

This season, Dhawan has been in good form but fell early in the last match, and young Prithvi Shaw has struggled to score runs in the second half of the IPL. In the middle-order, Shreyas Iyer and Rishab Pant have been the pillars of the batting unit. Hetmyer scored some quick runs and finished the innings well for DC.

This bowling unit can defend a total on any given day. Anrich Nortje and Kagiso Rabada are picking up wickets consistently. Avesh Khan, Axar Patel, and Ravichandran Ashwin managed to pick up one wicket each.

Delhi Capitals look unstoppable at this point in this season.

The weather will be mostly sunny.

The venue generally offers high-scoring games, but the pitch has been slow this season, and the batsmen have struggled to score runs. Teams will want to winning the toss and bat first.

Russell has been the crucial player for KKR in the middle-order and also performed well with the ball. He scored 20 runs and picked up a wicket in the previous match. If plays, He is very good Captain choice in KOL vs DC Dream11 Team.

Narine is one of the toughest spinners to face for any batsman. He struggled this season but managed to pick up three wickets in the last match.

He has added more strength to the batting unit of the team in the second half. Iyer scored 18 runs in the last match.

Varun Chakravarthy is the key spin bowler of the team. He bowled well, picking up one wicket for just 22 runs.

Tripathi is the leading scorer of the team and bats at No.3. He scored 45 runs in the last match.

He is a right-arm fast bowler. L Ferguson played 3 matches so far and took 5 wikcets in IPL 2021.

Shubman Gill is not looking in form but he is very talented batsman.

Dhawan is currently the leading run-scorer of the season but got out for eight runs in the last match.

Shreyas Iyer started playing this season in the second half and has been batting brilliantly. He scored 43 runs in the last match.

Pant has handled the role of captaincy well. He scored 24 runs in the last match.

Rabada has picked up wickets consistently in the last few matches and picked up a wicket in the previous game.

He performed brilliantly in the first half of the IPL but has been struggling recently. Avesh Khan managed to pick up a wicket in the last match.

Nortje, along with Rabada, is a deadly combo against any team. He picked up two wickets for 18 runs in the last match.

Prasidh is leading the pace attack well this season. He managed to pick up a wicket but was slightly expensive in the last match.