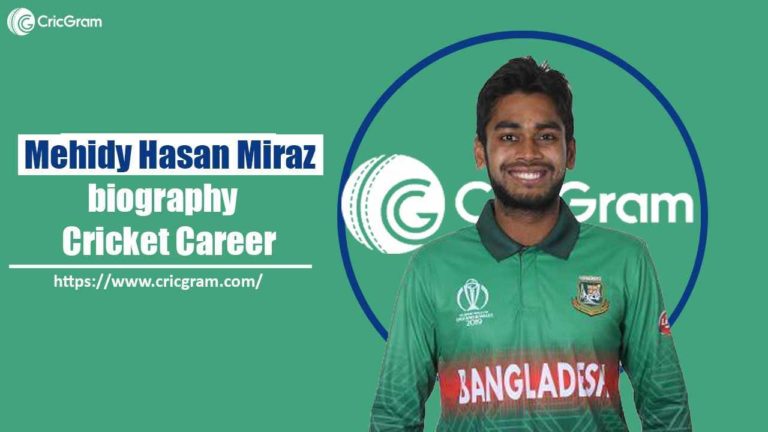 He completed his initial Schooling education from a school in Khalishpur city, And after that, He Had Joined The Cricket Academy at A Very young age, and then, he had done his full focus on cricket

He started playing cricket at the age of only 8 and he joined Khalishpur Cricket Academy at the same age, And from there they got the chance to play under 14 National Cricket Tournament for the first time. In which he had performed very well.

Mehidy has learned all the stakes of his cricket from his cricket coach ‘Sohail Islam’, and his coach has contributed a lot in making them a famous cricketer of Bangladesh.

Mehidy did the debut in the first-class cricket of Bangladesh as an all-rounder on February 16, 2015, and he was part of the Rajshahi Division Cricket team, and he played a century inning in his debut match and was also taken for 4 wickets.

Mehidy Hasan has done debut in T-20 cricket, with the Bangladesh Premier League (BPL) in 2016, and he was part of the Rajshahi Kings team in that league, and he played his first match in this league on November 9, 2016.

Mehidy has done a debut in the Bangladeshi international team in October 2016 as an all-rounder, and he was first selected in the International Test team of Bangladesh and he played his first match against the England team.

After 2 months later, in December 2016, he was selected in the international team of Bangladesh for the one-day match, and this ODI was going to happen between Bangladesh and New Zealand teams, but unfortunately, he did not get a chance to play any match in this ODI series.

And after that, in the one-day match against Sri Lanka in March of 2017, he was again selected in the international team of Bangladesh and he has done his ODI International Cricket Debut in March 2017 against the Sri Lanka team.

Mehdi Hasan has done his debut in T20 International Cricket in April 2017, and he has played his first international T20 match against the Sri Lanka team.

How are you feeling after reading Mehidy Hasan Miraz’s bio, cricket career, and about his life, Do not forget to enter your comments, opinion and feedback below the comment box?