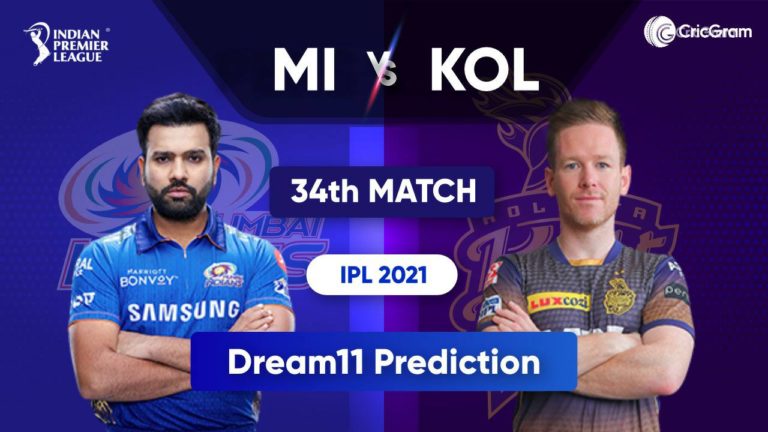 Mumbai Indians vs Kolkata Knight Riders will be played in the 34th match of IPL 2021 at Sheikh Zayed Stadium, Abu Dhabi. We will cover MI vs KOL Dream11 Prediction, Probable Playing 11, and Fantasy Cricket Tips of IPL 2021.

Mumbai Indians started the second leg of the IPL with a defeat and are currently at the 4th position on the points table with four wins and four losses.

Quinton de Kock has been in decent form, Rohit Sharma was rested for the last match, and Anmolpreet Singh replaced him and played a couple of aggressive knocks. At No.3, Surya Kumar Yadav has failed to perform to everyone’s expectation.

In the middle-order, Ishan Kishan has struggled to score runs this season. Pollard and Krunal performed decently in some matches but went out early. Saurabh Tiwary scored fifty in the last game but could not take his team to victory.

The bowling unit performed exceptionally well in the last match but lost control towards the end. Trent Boult, Bumrah, and Milne picked up two wickets each. The crucial wicket-taker, Rahul Chahar, went wicketless in the last match. MI is a strong team, and we can expect a comeback from them.

Kolkata Knight Riders surprised everyone with their performance in the last match and jumped to 5th position on the points table with three wins and five losses.

Knight Riders tried a new opening pair in Shubman Gill and Venkatesh Iyer, and they performed brilliantly. Nitish Rana is likely to play at No.3, and Rahul Tripathi will be pushed to the middle-order.

The bowling unit finally delivered a good performance for the team. Andre Russell and Chakravarthy picked up three wickets each, but Narine has struggled to pick up wickets. Lockie Ferguson played in the absence of Pat Cummins and picked up two wickets.

Kolkata Knight Riders would like to continue this momentum and qualify for the playoffs.

There will be clear skies with hot and humid temperatures.

The pitch here is a good batting surface, but the bowlers will get help in the initial overs of the match. Chasing the target looks easier here when compared to batting first.

Quinton is the wicket-keeper and also opens the innings for the team. He scored 17 runs in the last match. Quinton de Kock is a very good Captaincy choice in MI vs KOL Dream11 Team.

Skipper Rohit opened the inning with de Kock but did not play the last match as the team management wanted him to rest.

Surya is a good striker of the ball but has struggled a lot this season to play a good inning.

He swings brilliantly in the initial overs of the match. Boult managed to pick up two wickets and a maiden over.

After a tough time in the first half of IPL, Bumrah started well by picking up two wickets in the last match.

Chahar bowls leg-break but was unlucky in the last match as he went wicketless but controlled the flow of runs.

Russell is a power hitter and bats in the middle-order. He picked up three wickets for just nine runs and is a good choice for Captain and Vice-Captain in the MI vs KOL Dream11 team.

Shubman Gill looks in brilliant form as he scored 48 runs from just 34 balls in the last match.

He is a right-arm off-break bowler. Sunil Narine can also bat.

Varun Chakravarthy has picked up wickets consistently for KOL this season. In the last match, he got three scalps for just 13 runs in his four overs.

He is an express fast bowler and rushes the batsmen. Ferguson performed well, picking up two wickets in the last match.

Narine is an experienced player and has played several leagues but has struggled to pick wickets in this IPL season.