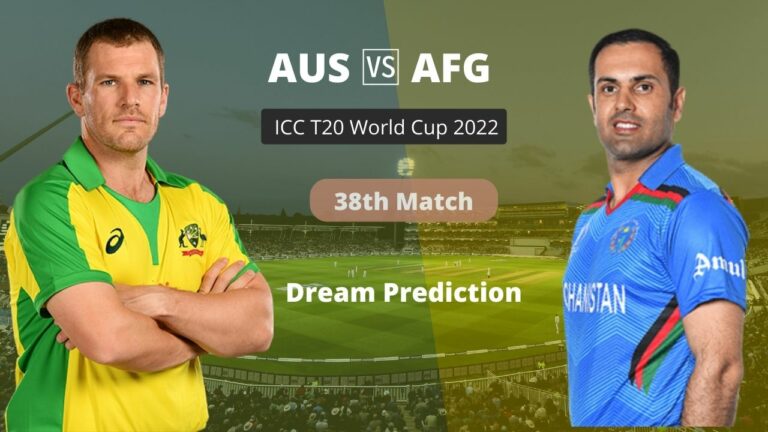 Australia vs Afghanistan will play in the 38th match of the ICC Men’s T20 World Cup 2022 at Adelaide Oval, Adelaide.

Australia has won 2 out of their 4 games so far with 1 game being washed out due to rain. They are currently placed third on the points table and will need to win all their remaining games to keep their hopes alive for the semis. They won their last game against Ireland by 42 runs.

Batting first, they lost David Warner early but Aaron Finch and Mitch Marsh played very well and scored 63 and 28 runs respectively. In the end, Marcus Stoinis played a fine knock of 35 runs and helped their team post a total of 179 runs.

With the ball, All their bowlers bowled very well and bowled out the Irish for just 137. Pat Cummins, Mitch Starc, Glenn Maxwell, and Adam Zampa all bowled brilliantly and picked up 2 wickets each.

Batting first in the last game, their batters looked ordinary and managed to post a total of just 144 runs. Rahmanullah Gurbaz and Usman Ghani were excellent at the top and scored 28 and 27 runs respectively.

With the ball, their bowlers were expensive and failed to pick up wickets at regular intervals. Rashid Khan and Mujeeb Ur Rahman bowled very well and picked up 2 wickets each.

The pitch at Adelaide is expected to be very good for batting. So far, the two games played at the venue have been won by the team batting first. Anything above 170 will be a good competitive total.

There is no chance of rain at the venue and we are likely to witness a full game of 20 overs.

You can also catch the live commentary, scorecard, and latest updates of the 31st match between AUS vs AFG by clicking here AUS vs AFG Live Score.

AUS vs AFG Head to Head

He will open the innings and needs no introduction. Warner scored only 3 runs in the last game but is still a very good choice for C and VC in AUS vs AFG Dream11 Team.

He will bat in the middle-order and also bowl 1-2 overs. Maxwell scored 13 runs with the bat and picked up 2 wickets with the ball.

He is another quality all-rounder but will mainly contribute with the bat. Marsh batted decently in the last game and scored 28 runs.

He will open the innings and is in very good form. Finch batted very well in the last game and scored 64 runs.

He is their main pacer and will bowl in powerplay and death. Hazlewood went wicketless in the last game but is a quality player.

He is a left-arm pacer and will bowl in death. Starc picked up 2 wickets in the last game but was expensive.

He is another top-class bowler from the team. Cummins bowled very well and picked up 2 wickets in the last game.

(The below performances are against England in their first game)

He is a world-class bowler and needs no introduction. Khan bowled very well in the last game and picked up 2 wickets and is another very good choice for C and VC in AUS vs AFG Dream11 Team.

He will contribute with both bat and ball and is a very experienced player. Nabi scored 13 runs with the bat and went wicketless with the ball in the last game.

He is a very talented batter and will also keep behind the stumps. Gurbaz batted very well and scored 28 runs with the bat.

He is a left-arm fast bowler and will bowl in powerplay and death. Farooqi went wicketless in the last game.

He is another quality spinner on the team and will bowl in powerplay. Rahman bowled very well in the last game and picked up 2 wickets.