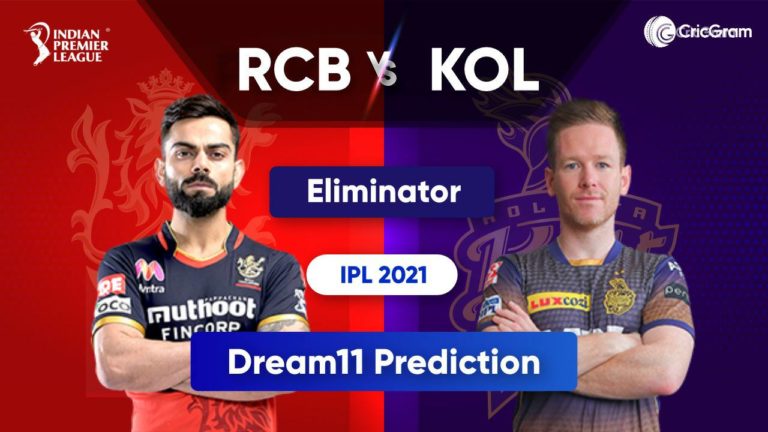 Royal Challengers Bangalore and Kolkata Knight Riders will clash in the Eliminator match of IPL 2021 at Sharjah Cricket Stadium, Sharjah. We will cover BLR vs KOL Dream11 Prediction, Probable Playing 11, and Fantasy Cricket Tips of IPL 2021.

Royal Challengers Bangalore won their last match of the league and finished at the 3rd position on the IPL 2021 points table with 18 points.

Virat Kohli and Devdutt Padikkal’s form has taken a dip in the recent matches, and they have failed to provide a good start. Srikar Bharat is back at No.3 and batted brilliantly, scoring 78* runs along with Maxwell’s 51* runs which took them to a thrilling victory, but Ab de Villiers has not achieved much recently.

The bowlers underperformed in the last match. Siraj has been controlling the flow of runs well and finally managed to pick up wickets in the previous game. Chahal, Harshal Patel, and Christian got one wicket each.

RCB would be hoping to continue the momentum and win the Eliminator against Kolkata Knight Riders.

Kolkata Knight Riders made a brilliant comeback in IPL 2021 and won seven out of the 14 matches and finished at the 4th position on the IPL 2021 points table with 14 points.

Shubman Gill is back in form as he scored two back-to-back fifties, and Venkatesh Iyer has been playing sensibly at the top. Nitish Rana is in good shape and was promoted to No.3 but fell early in the last match. Rahul Tripathi and Dinesh Karthik batted well and provided an excellent finish to the team.

The spinners were the consistent wicket-takers for the team in IPL 2021, but the pacers performed brilliantly in the previous game. Shivam Mavi and Lockie Ferguson picked up four and three wickets, respectively. Varun Chakravarthy and Shakib Al Hasan managed to pick up one wicket each.

Kolkata appears to be an improved side and has an excellent chance to win the Eliminator against RCB.

The weather will remain hot, and the humidity will be high.

The pitch has behaved slowly throughout the season, but Kolkata Knight Riders batted well and posted a good total in the last match. Based on the games completed here, the teams chasing had more success.

Maxwell has been batting at a strike rate of 147 runs in IPL 2021. He scored a fifty in the last match and has scored a total of six fifties. Glenn Maxwell is very good Captaincy choice in BLR vs KOL Dream11 Team.

Virat Kohli is once again struggling this season and scored only four runs in the last match. He is very good pick in RCB vs KKR Fantasy team.

Harshal Patel is in great form this season and is the leading wicket-taker. He picked up a wicket in the last match.

Devdutt Padikkal performed brilliantly in some matches and has been poor in other games. He was out for a duck in the last match.

Chahal has made a comeback in IPL 2021 and managed to pick up a wicket in the last match.

Russell is the crucial player of the team but has not been able to play the last few matches due to injury. If played he is very good to pick in RCB vs KOL Dream11 fantasy taem.

Venkatesh has been the best find for Kolkata Knight Riders in IPL 2021. He scored 38 runs in the last match.

Gill struggled a lot this season but is looking back in form as he scored 56 runs in the last match.

Ferguson troubles most of the batsmen with his pace. He picked up three wickets for just 18 runs in the last match.

Varun Chakravarthy has picked up the most number of wickets for KKR in IPL 2021. He got one wicket for 14 runs in the last match.

Narine did not succeed in IPL 2021, but he can turn around the match at any point with bat and ball. He went wicketless in the last game.

He is a right-arm fast medium bowler. Shivam took 9 wickets in 6 matches.

Bharat is the wicketkeeper-batsman and generally bats at No.3. He scored 78* runs from 52 balls in the last match.

Tripathi has batted in the middle-order for the team and scored 21 runs from 14 balls in the last match.