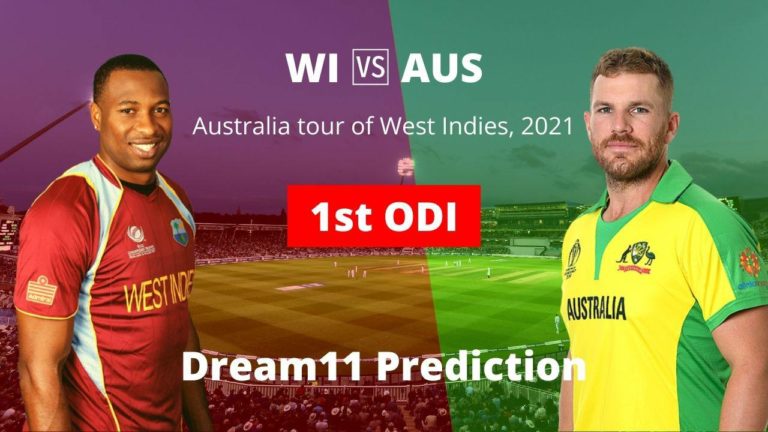 Hello and welcome to our WI vs AUS Dream11 Prediction, match preview, and Fantasy Cricket Tips of the 1st ODI, Australia tour of West Indies, 2021.

West Indies will take on Australia in the 1st ODI match at the Kensington Oval, Bridgetown, Barbados.

After the T20Is, it’s now time for the ODIs. The Windies completely dominated the T20I series, won the series by 4-1, and played with a new squad in the ODI series. Their skipper Kieron Pollard’s fitness is still not clear, and if he misses the first game, then Nicholas Pooran is expected to lead the side.

They did not have a great series against Bangladesh but played very good cricket against Sri Lanka in their last series and won by 3-0. Their batting department looks very good on paper with players like Shai Hope, Evin Lewis, and Shimron Hetymer at the top and power hitters like Nicholas Pooran and Pollard lower down the order.

Shai Hope will play a big role with the bat in this series and is currently one the most technically sound batsman on the team. He was brilliant in their last series against Sri Lanka and had scores of 110, 84, and 64.

Their bowling will be a bit weak compare to the T20 series but still have big names like Jason Holder, Sheldon Cottrell, and Alzarri Joseph. They will look to continue their dominance in the ODI series and grab those important World Cup Super League points.

After some disappointing performance in the T20I series, the visitors will play a three-match ODI series to end the tour. They have been outstanding in this format lately and will be coming into this series after a win against India in their last ODI series, but it has been nearly six months since they have played any 50 over cricket.

They will also be without the services of the skipper Aaron Finch who will miss the first game due to his knee injury. Alex Carey has been named the Captain of the team in his absence and will lead the side for the first time. Their batting unit looks completely new and inexperienced in the absence of their senior pros, but their bowling looks much better with the likes of Mitch Starc, Josh Hazlewood, and Adam Zampa in the squad.

The team will be looking forward to seeing how Mitch Marsh performs in the ODIs after his brilliance in the T20I series and will play a key role in this game as well. For Australia, they will look to finish the tour on a high and seal the series.

The Weather forecast looks cloudy but no rain is expected during the game so far.

(The average score is based on the last 5 matches played so far at this venue).

Kensington Oval will be hosting an international game after nearly a year and the pitch is expected to be a good one to bat and a score of above 300 can be on cards.

He is one of the most technical batsmen on the team and will open the innings for the team. Hope was brilliant in the last series against Sri Lanka and is one of the best Captain and Vice-Captain choices for WI vs AUS Dream11 Prediction.

He has some excellent numbers in this format and will play a key role for his team in this series. Chase will bowl his 10 overs of off-spin in the middle overs and bat in the middle-order and is a must-have pick.

He is one of the best all-rounders in the world. The holder is expected to bowl with the new ball and is also very good with the bat and will lower the order. He is another good option for C and VC in your dream11 teams.

Pollard will do the finishing duties for the team and can also bowl a few overs with the ball. He is a very experienced player and is another top pick for the game.

He was brilliant in the T20I series recently and will look to continue his form in this series as well. Lewis will open the innings and is a very aggressive batsman.

He is a left-arm orthodox bowler and can also score some handy runs with the bat. Allen performed very well in the T20I series both with bat and ball and is another must-have pick for your team.

He is a right-arm fast-medium bowler who will bowl in the power play and death. S Cottrell performed very well in the last T20I game and picked up 3 wickets.

He is a right-arm fast bowler who has some brilliant numbers. Joseph has picked up 54 wickets from his 34 games.

He is a left-handed batsman who will bat in the middle-order and is in very good form recently. Hetymer can be a great differential pick in your small league teams.

He led the team very well in the T20I series and is the quality batter. Pooran has been in and out of form lately but is a very talented batsman.

Mitchell Marsh is expected to bat at No 3 and bowl 8-10 overs with the ball. He was the leading run-scorer in the T20I series and also was very good with the ball and is a very good option for C and VC in WI vs AUS Dream11 team prediction.

Wade will open the innings in the absence of Finch and is also a very experienced player. He looked in decent touch in the T20I series.

He is one of the best bowlers in the world but has not been in good form lately. Starc looked good in the 2nd T20I but did not look great in the rest of the games.

He will bowl in the power play and death. Hazlewood has some impressive numbers in this format and will be their key pacer and is a must-have pick in your fantasy sides.

(yet to make his debut)

He is a very talented young player and is expected to open the innings. Josh Phillipe did not look in great touch in the T20I series.

He is the team’s skipper and will also do the keeping duties behind the stumps. Carey did not perform well in the T20s but is a very talented player in this format.

He is a left-arm fast bowler and is known for his pace and bounce. Behrendroff will bowl with the new ball and is another top pick for the game.