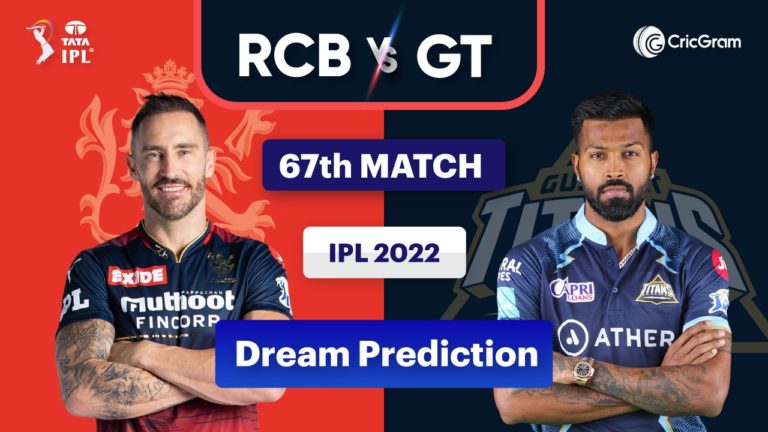 Royal Challengers Bangalore vs Gujarat Titans will play in the 67th match of the IPL 2022 at the Wankhede Stadium, Mumbai.

It is a must-win game for them to qualify for the playoffs. They will look for a better batting performance in this game. RCB lost their last game against PBKS by 54 runs.

Bowling first, their bowlers were smashed all around the park and were expensive. Only Wanindu Hasaranga and Harshal Patel look good and picked up 2 and 4 wickets respectively.

With the bat, once again their top order failed to build big partnerships and never looked settled in the whole chase. Glenn Maxwell and Rajat Patidar were the only two batters who had some runs to their name and scored 35 and 26 runs respectively.

They have been one of the top sides in the competition and are on the top of the IPL 2022 points table with 20 points. GT won their last game against CSK by 7 wickets.

With the bat, Wriddhiman Saha was solid at the top and scored 67* runs. Mathew Wade and Shubman Gill also batted decently and scored 18 and 20 runs respectively.

GT have already registered their place in the top 2 and can make some big changes in this game and can give some rest to their core group.

The pitch is expected to be very good for batting with short boundaries in both the sides. The last game saw a total of above 190 by both the teams and something similar can be expected in this game as well.

The live streaming of Royal Challengers Bangalore vs Gujarat Titans, 67th match of IPL 2022 will be available on Hotstar app and Star Sports Network.

You can also catch the live commentary, scorecard, and latest updates of the Indian Premier League 2022 match between RCB vs GT on IPLT20.com.

RCB vs GT Head to Head

He is one of their best all-rounders. Maxwell scored 35 runs with the bat and also picked up a wicket with the ball in the last game and is a very good pick for C and VC in BLR vs GT Dream11 Prediction.

He is the skipper of the team and will open the innings. Faf scored only 10 runs in the last game and will be hungry for runs in this game.

He needs no introduction and is one the best batsman in the competition. Kohli was decent in the last game and scored 20 runs.

He is one the best all-rounders in the world. Hasaranga bowled brilliantly in the last game and picked up 2 wickets.

Patel will be their go to bowler and will bowl in death. He was excellent in the last game and picked up 4 wickets.

He is one of the best bowlers and will bowl in powerplay and death. Hazlewood went wicketless and was also very expensive in the last game.

Karthik is in outstanding form and will do the finishing duties for the team. He scored only 11 runs in the last game but is in very good form.

He is the skipper of the team and will bat in the middle-order. Pandya scored only 7 runs in the last game and will be desperate to score in this game. He is still a very good option for C and VC in “RCB vs GT Dream11 Team”.

S Gill will open the innings and is one of their best batsman. He batted decently in the last game and scored 18 runs.

He is one of the best bowler in the competition. Rashid bowled decently in the last game and picked up 1 wicket.

He will lead the bowling attack and is one of the best pacers. Shami was brillaint in the last game and picked up 2 wicekts.

He will do the finishing duties for the team and is in brilliant form. Miller did not get to bat in the last game.

He is a left-arm orthodox spinner and is a very talented player. Kishore bowled very well in the last game and picked up 1 wicket and can be a trump card pick in this game.

Currently, Yuzvendra Chahal is the purple cap holder. He took 24 wickets in 13 matches so far in Tata IPL.