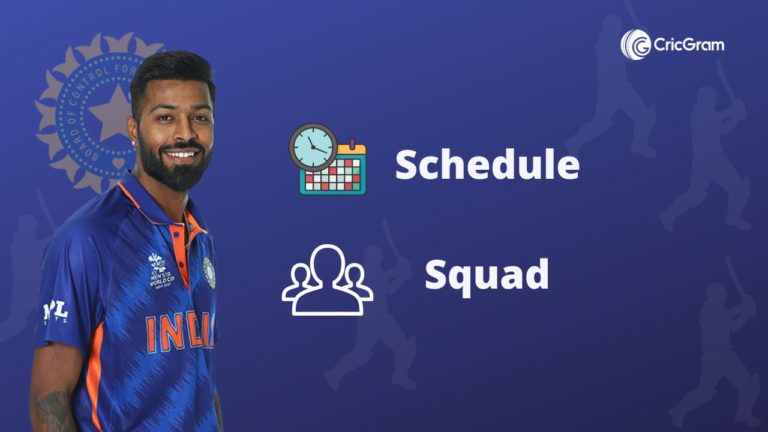 In this article, we will discussing about India tour of Ireland, India Squad for Ireland, Schedule and timings of the matches in Indian Standard time and also live streaming details of this tour.

India Squad News for the tour of Ireland

India will be playing two T20Is against Ireland after playing the T20I series against South Africa at home. They will be touring Ireland for 2 T20Is. All the main players have been rested for this series.

A 17-member squad have been named for this series. Hardik Pandya has been named as the skipper of the team and will lead the Indian side for the first time in these two games. Suryakumar Yadav is also back in the squad after missing out the last series due to injury. Sanju Samson who also looked very good in the Indian Premier League has also made his comeback in the squad.

Rahul Tripathi has also received his maiden India call-up in this series. Dinesh Karthik and Umran Malik also retain their place in the squad. Below is the detailed schedule for this series with the date, time, and Venue.

Since, the senior Indian team and the coaching staff will be in England preparing for the final test, VVS Laxman has been named has the head coach for this series. Shitanshu Kotak and Sairaj Bahutule have been named has batting and fielding coach respectively.

Schedule for India tour of Ireland

Both the T20Is will be played at the Malahide Cricket Club in Dublin. The matches will begin at 9:00 PM IST and 4:30 PM local time.

India tour of Ireland will be live telecasted on Sony Sports Network in India and also the Sony liv app.

You can also catch up all the live scores, news by clicking here IRE vs IND live Score

Ireland Men’s squad for the T20I series against India has been named.