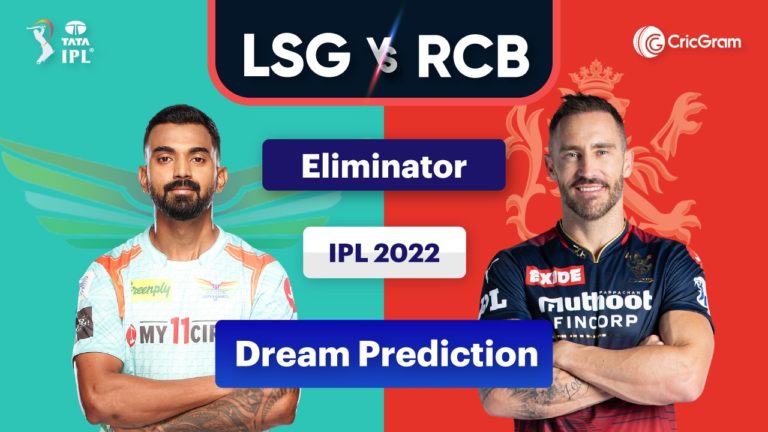 Lucknow Super Giants vs Royal Challengers Bangalore will play in the eliminator match of the IPL 2022 at the Eden Gardens, Kolkata.

Lucknow Super Giants finished the league phase with 18 points and were the second team to qualify for the playoffs. They have been brilliant throughout the season and look well balanced.

KL Rahul and Quinton de Kock will be their key batters as usual. Evin Lewis is likely to bat at 3. Deepak Hooda will bat in the middle-order and has been very good for them this season. Marcus Stoinis will do the finishing duties.

With the ball, Mohsin Khan and Avesh Khan are expected to lead the pace attack. Mohsin Khan has been outstanding for them this season and has picked up 13 wickets. Krunal Pandya and Ravi Bishnoi will be their key spinners and have been decent for them.

It is a do or die game for them and will look to play at their best.

RCB were the fourth team to qualify for the playoffs. They were brilliant in the first 7 games but were a bit inconsistent in the second half. RCB look well balanced on paper with big names in all the departments.

Dinesh Karthik has been fantastic for them lower down the order and has been scoring consistently. Glenn Maxwell has also been handy in middle-order. Virat Kohli has also come to party at the right time. Skipper Faf Du Plessis has been there highest run scorer with 443 runs.

With the ball, Wanindu Hasaranga has been brilliant in the middle overs and has picked up 24 wickets for them. Harshal Patel and Josh Hazlewood has also been good throughout the season. Any one of Siraj or Kaul will be their third seamer.

RCB will be pumped up going into this game and will give it their all in this game.

The pitch at the venue is generally very good for batting with short boundaries. In the last game at Eden Gardens, Gujarat Titans successfully chased down 188 runs in 19.3 overs.

There is some chance of rain throughout the day but the game is likely to happen.

The live streaming of Lucknow Super Giants vs Royal Challengers Bangalore, Eliminator match of IPL 2022 will be available on Hotstar app and Star Sports Network.

You can also catch the live commentary, scorecard, and latest updates of the Indian Premier League 2022 match between LSG vs RCB on IPLT20.com.

LSG vs RCB Head to Head

He needs no introduction and is one the best batsman in the competition. Rahul was brilliant in the last game and scored 68* runs and is a default pick for C and VC in LKN vs BLR Dream11 Prediction.

Q de Kock is also a very talented player and will also do the keeping duties. De Kock was unstoppable in the last game and scored 140* runs.

He is a world class all-rounder. Holder went wicketless in the last game and was expensive.

He is their main bowler in this season. Avesh Khan also went wicketless and was very expensive in the last game.

He is a left-arm fast bowler and will bowl in powerplay and death. Khan was brilliant in the last game and picked up 3 wickets.

Hooda will bat at 3 and is a very talented player. He did not get to bat in the last game but is in very good form.

He will contribute with both bat and ball and is in very good form. Pandya did not play the last game.

He is one the best spinners in the competition. Ravi Bishnoi bowled decently and picked up 1 wicket in the last game.

He is one of their best all-rounders. Maxwell scored 40* runs with the bat and also picked up 1 wicket in the last game and is an excellent pick for C and VC in LKN vs BLR Dream11 Team.

He is the skipper of the team and will open the innings. Faf batted very well in the last game and scored 44 runs.

He needs no introduction and is one the best batsman in the competition. Kohli has finally returned to form and 73 runs in the last game.

He is one the best all-rounders in the world. Hasaranga bowled very well in the last game and picked up 1 wicket.

Patel will be their go to bowler and will bowl in death. He bowled only 1 over in the last game and went off the field.

He is one of the best bowlers and will bowl in powerplay and death. Hazlewood bowled decently in the last game and picked up 2 wickets.

Karthik is in outstanding form and will do the finishing duties for the team. He did not get to face much balls in the last game.

He is a left handed batsman and will bat at top order. In a batting friendly wicket he can play big innings.

Currently, Yuzvendra Chahal is the purple cap holder. He took 26 wickets in 15 matches so far in Tata IPL.